The Immigration Bureau has arrested an Iranian and five Pakistani nationals who are suspected of being members of a major fake passport syndicate. 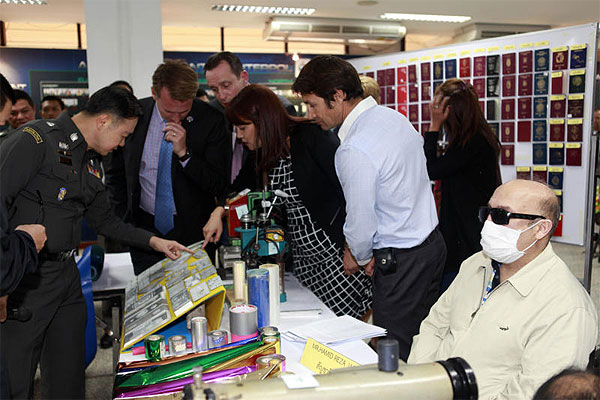 Police and staff from various embassies examine watermark blocks used to produce fake passports at a media briefing on the police operation to bust a major passport counterfeiting gang allegedly led by Iranian Hamid Reza Jafary, right with face mask and sunglasses, known as 'The Doctor'. photos by Apichart Jinakul

He said a detailed probe found the gang made bogus passports and supplied them to a network to be sold mostly to people from Middle Eastern countries to be used to travel to Europe and Australia.

"It is the largest passport forgery ring to have been arrested in the country in the past few years," he said.

A combined team of officials from the Immigration Bureau and Armed Forces Security Centre, along with representatives from the British, French, New Zealand and Australian embassies, conducted a search at the house of Mr Jafary after a warrant was obtained, police said.

The search found devices and equipment to be used in making fake passports including stamping machines, screen printing devices, sewing, punching and engraving machinery and lots of paper. Mr Jafary allegedly told police he had brought in the equipment from China.

Officers also found a total of 173 counterfeit passports which had been prepared to be sent to customers, police said.

The passports bore seals of approval from Thai and foreign immigration bureaus, according to police.

A fake stamp of approval from Nong Khai immigration office and visa stickers for Thailand were also found at the house, police said.

Mr Jafary allegedly confessed to investigators who questioned him that he had made forged passports to be sold to people around the world, police said.

Mr Jafary told police he has been living in Thailand for more than 25 years. He had entered Thailand on a fake Brazilian passport under the name Eliseu Leite Moraes, police said.

Pol Lt Gen Nathathorn said customers were mostly from Iran, Syria, Iraq and Afghanistan and they usually ordered the gang to produce passports via the internet.

After customers transferred their payment to the suspects’ bank accounts, they would send them the fake passports via couriers, he said. 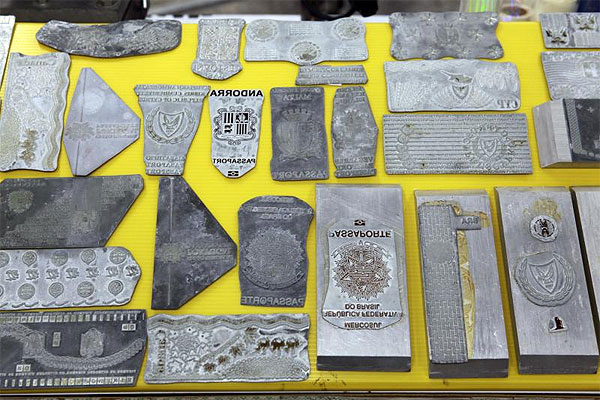 Watermark blocks are among items seized in the raid. 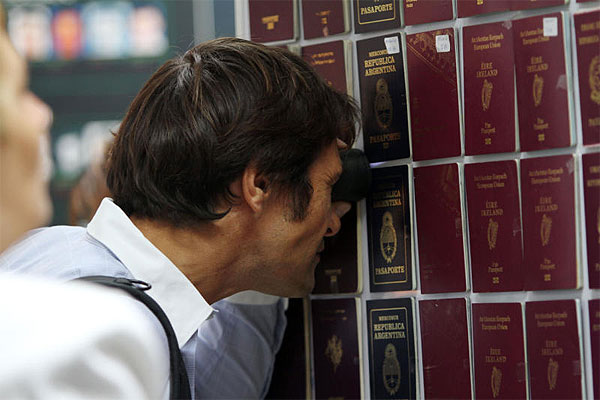 An embassy officer uses a small magnifying glass to study details of the 'AAA-grade' passports.