The "Death Railway" reopened about 12.30pm on Thursday after work gangs cleared away a 15-tonne rockslide and repaired the damaged track, in Sai Yok district, Kanchanaburi.

The service was suspended after train No.260 from Nam Tok station in Sai Yok on its way to Bangkok found the line blocked by huge rocks about 5.50am between Wang Pho and Thakilen train stations.

The track was damaged at two places about 100 metres from the well-known Krasae cave, beside the railway. 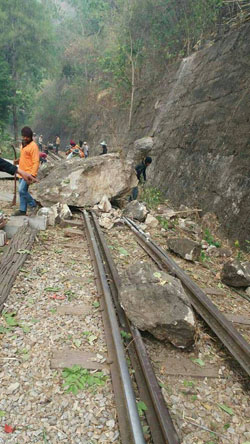 Parinya Buddhaphibal, a geologist at the Kanchanaburi campus of Mahidol University, inspected the scene and reported that a limestone rock weighing 15-16 tonnes and measuring 2.5 metres x 3 metres, and 1 metre thick, had fallen about 30 metres from the cliff above.

After hitting the track, the rock split in two big parts.

There were old cracks on the cliff immediately above the track, where the rock fell from, Mr Parinya said.

He advised the State Railway of Thailand (SRT) to conduct safety checks regularly in the area, because the railway served tourists.

The 400-metre-long track near Krasae cave is considered both the most beautiful and most dangerous section of the Death Railway. The track rests on the original wooden sleepers next to the cliff on one side, with a valley that leads down to the Kwai Noi River on the other.

The journey is popular with tourists and the trains run daily. They are forced to slow down on that section, affording passengers lovely views over the valley.