Ex-police chief Pol Gen Somyot Poompunmuang is the new president of the Football Association of Thailand (FAT) but a rival faction immediately protested his landslide victory. (Photo by Patipat Janthong)

Former national police chief Somyot Poompunmuang's landslide victory in Thursday's election for president of the Football Association of Thailand (FAT) was immediately challenged with the opposing faction seeking an annulment of the results.

Pol Gen Somyot became the 17th FAT chief, set to serve a four-year term, after receiving 62 votes against a paltry four for main rival Charnwit Phalajivin in the vote.

"I don't know much about football, but I have an 18-member team that represents clubs from across Thailand," said the new FAT president.

He needs approval from the Sports Authority of Thailand (SAT) to be formally appointed.

Sixty-eight of 72 eligible voters were present at a makeshift polling station set up at Indoor Stadium, Hua Mark amid tight security as there were fears of protests that did not materialise. 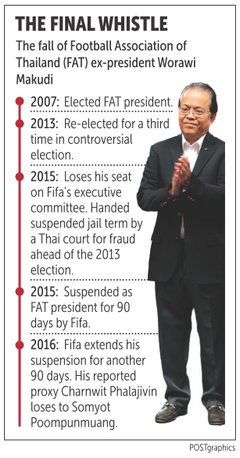 Pol Gen Somyot will take over the FAT reins from Worawi Makudi, a former Fifa executive member suspended by Fifa since October over an alleged breach of its code of ethics.

Mr Worawi denies any wrongdoing. Mr Charnwit was widely believed to have been a proxy of Mr Worawi's camp.

Thursday's result was seen as a huge blow for Mr Worawi, first elected FAT president in 2007.

Mr Worawi won the 2013 election in one of the most controversial polls in Thailand's sporting history. However, his star has since fallen.

Last year he lost his seat on Fifa's executive committee after holding the position for over a decade.

A few months later, a Thai court handed him a suspended jail term for forgery ahead of the 2013 polls. He is appealing the sentence.

Mr Charnwit said: "I knew what the result would be because the opponent was very strong."

"I have to accept the result of the election. I would like to thank everyone who voted for me and congratulate Pol Gen Somyot on his victory."

After the result was announced, FAT lawyer Narinpong Jinapak, one of Mr Worawi's close aides, sent a representative to lodge an appeal with SAT governor Sakol Wannapong, seeking for the election to be declared null and void. 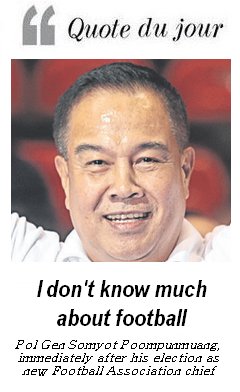 Mr Narinpong, in the letter submitted to the top official of the government's sports-controlling arm, argued that the re-election of 30 regional voters belonging to Division Two on Jan 22 breached the FAT constitution, thus rendering Thursday's ballot an illegal act as well.

The 30 voters were originally elected in September when Mr Worawi was at the helm. A month later, Fifa suspended Mr Worawi and appointed a normalisation committee to organise the election for a new FAT president.

The panel, chaired by Adm Surawut Maharom, then organised a re-election of the 30 voters from the Regional League (Division Two, third tier).

It was believed that almost all 30 voters supported Pol Gen Somyot. The other voters were 18 representatives each from the Thai Premier League and League One (second tier) and six representatives from minor competitions.

After being elected, Pol Gen Somyot said he would "clean up" Thai football. He did not mention Mr Worawi specifically.

"I would like to thank the normalisation committee for staging the election in a fair manner and also the representatives from Fifa and Asian and Asean football governing bodies for witnessing the entire process as observers," said Pol Gen Somyot who reached his mandatory police retirement age of 60 at the end of September.

"As I said before the election, myself and my team will work to the best of our abilities to manage the FAT in a fair manner."

"We will work hard to bring success to Thai football and help it progress as expected by the fans." Pol Gen Somyot said. "I am confident that our work will be clean, transparent, fair and open to scrutiny."