The Thai army needs more weapons to be used as a response to potential enemy attacks in order to protect the country, Deputy Defence Minister Udomdej Sitabutr says. 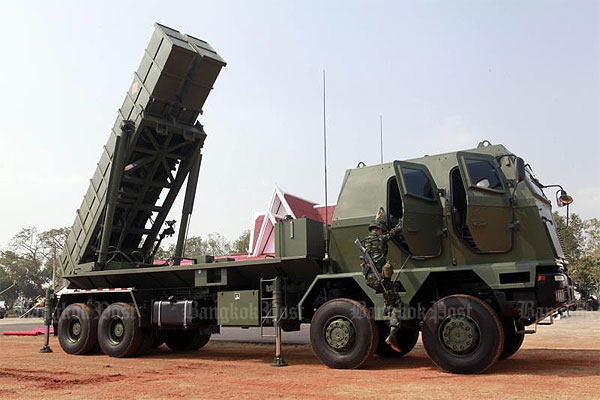 A multiple-rocket launcher developed by the Defence Technology Institute at the handover ceremony at the Artillery Division in Lop Buri yesterday. (Phot by Apichart Jinalkul)

“We have weapons meant to be used for protecting our country. We don’t have any to intimidate or attack other countries," Gen Udomdej said, adding weapons represent the military's power.

Gen Udomdej was speaking on Friday as he presided over a ceremony to hand over a system capable of launching multiple rockets held at the Artillery Division in Lop Buri.

In 2011, the DTI collaborated with China's Ministry of Defence to conduct a research study on the development of DTI-1 rocket launchers, a military source said. The locally-developed weapon was produced two years later. The rockets were then modified into DTI-1 guided missiles.

A test firing of the DTI-1 guided missiles was carried out in China last year to determine their effectiveness, the source said.

The missiles travelled 150km when they were tested although they have a maximum range of 180km, the source added.

Prime Minister Prayut Chan-o-cha and Deputy Prime Minister and Defence Minister Gen Prawit Wongsuwan have backed the idea of the RTA developing weapons itself to be used to protect the country, Gen Udomdej noted.

The RTA has ordered another three multiple rocket launchers, the source said, saying it plans to develop two more rocket launcher systems. Two factories will be built to produce rocket propellant with a total budget of 3 billion baht for the whole project, the source added.

The RTA has also expressed an interest in conducting research and development on tanks and an unmanned aerial vehicle, the source said.