Nok Air executives failed to show up for a scheduled meeting Monday with aviation authorities after hundreds of its passengers were left stranded on Sunday when the airline's pilots went on strike.

Almost a dozen Nok Air pilots walked off the job because the airline boosted auditing of aviation management to be in line with standards set by the European Aviation Safety Agency.

All except Nok Air attended the meeting chaired by Deputy Transport Minister Omsin Cheevapruek. Nok Air executives informed the aviation authorities it was holding an internal meeting to tackle the problem.

Patee Sarasin, chief executive of Nok Air, told reporters in the morning that he had a photo-shoot session to attend. He also said the airline would punish the pilots.

Later in the day, Mr Patee, communicating in a text message, said he would not talk to the media until the carrier comes up with a plan to resolve its internal problems.

Shortly after his text message, Nok Air released a statement saying it is taking action against 10 people believed to be responsible for Sunday's strike.

Of them, one has been dismissed, two were suspended for seven days from Monday until next Tuesday, and the seven others face an inquiry, including a deputy vice president overseeing flight operations.

Early in the day, the airline issued a statement to aplogise to its passengers over the cancellation of nine flights caused by the strike and promised to take full responsibility, in compliance with aviation regulations.

According to Nok Air's statement, the incident involved some disgruntled pilots who did not meet the audit requirements of the airline which is in the process of upgrading its standards to pass the International Air Transport Association's Operation Safety Audit.

Speaking after the meeting with the airline representatives, Mr Omsin said all carriers are required to draw up contingency plans and appoint a "manager on duty" to make decisions in case of emergencies, including abrupt flight cancellations.

He said the airlines are also required to submit a risk management plan to the Transport Ministry within 30 days.

As for passengers, airlines are required to provide food and drink, communication devices and accommodation as deemed appropriate and compensation of 1,200 baht.

"A first violation will result in a warning. The second is punished by suspension of the Air Operator Licence. The third results in revocation of the AOL, and that is up to the transport minister," he said.

However, he pointed out that no staff with decision-making power were sent to explain the situation to the passengers on Sunday, and this must not happen again as it could cause tensions.

He said the cabinet will be informed Tuesday of the Nok Air incident and steps the aviation authorities have taken to resolve the matter.

Amphawan Wannako, deputy director-general of the Department of Airports, said an investigation would be launched into the incident and penalties would be meted out against Nok Air.

Transport permanent secretary Chartchai Thipsunawee said Nok Air management is expected to submit its explanation to the authorities in three days as to why the flights were cancelled. 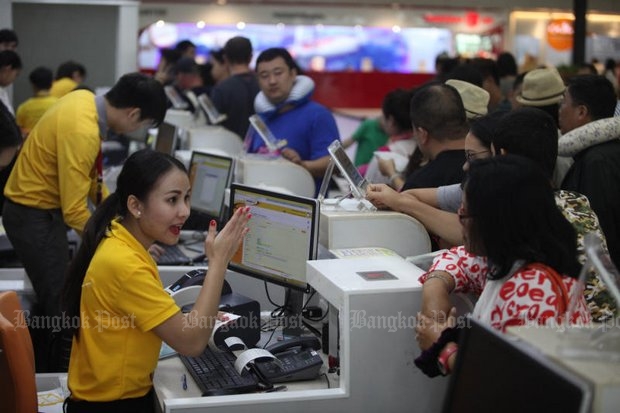 Monday was an exhausting day for the Nok Air staff as they battled long lines of customers and tried to catch up from Sunday's flight cancellations.

Speaking after his visit to THAI headquarters as part of a follow-up on the performances of state enterprises, Mr Somkid said based on the airline's financial report, the company's plan to cut losses is working.

As the airline is heading toward the next phase of its rehabilitation plan -- a phase Mr Somkid has described as "take-off", it will need a strategic plan for the next 10 years.

The Finance Ministry, which is the company's major shareholder, will give the airline its full support, he said.

"The airline has to explore ways to increase its income and it has to look far into the next five or 10 years, not a few years ahead. The finance minister is ready to give the airline full support, but THAI has to prove itself first," said Mr Somkid.

The loss-ridden flag carrier which suffered an operating loss of 18.1 billion baht in the first nine months of 2015, aims to slash operating costs and capacity by 20% under a plan to cut losses and reduce debts.

The company's financial performance for full-year 2015 will be announced on Feb 29.

According to Mr Somkid, the national carrier should also seek alliances and adjust routes to Asean countries, especially Cambodia, Laos, Myanmar and Vietnam.