KAMPHAENG PHET – A crash between a tour coach heading from Trat to Tak and an 18-wheel truck killed six people and injured another 25 on a section of Phahon Yothin road undergoing maintenance in Khlong Khlung district early on Tuesday.

The accident, around 2.15am, caused a traffic jam several kilometres long because roadworks on the inbound route mean all vehicles must use the outbound lanes.

The coach departed Trat with 48 passengers for a trip to Tak’s Mae Sot district. It collided head-on with an 18-wheeler with a full load of sugar between kilometre markers 413 and 414 of Phahon Yothin road.

Both drivers died in their vehicles. Three passengers in the bus and one in the truck were also killed. Another  25 injured passengers were taken to Khong Khlung hospital.

Somyos Promkrot, 33,  said he was at the wheel of the bus until Pathum Thani, where the relief driver, known only as Noi, took over for the rest of the journey. Mr Somyos said he was asleep when the accident happened.

Pol Maj Yuthana Puksook, a case officer at Khlong Khlung police station, said initial inquiries indicated the coach was trying to overtake another vehicle when it collided with the sugar truck. 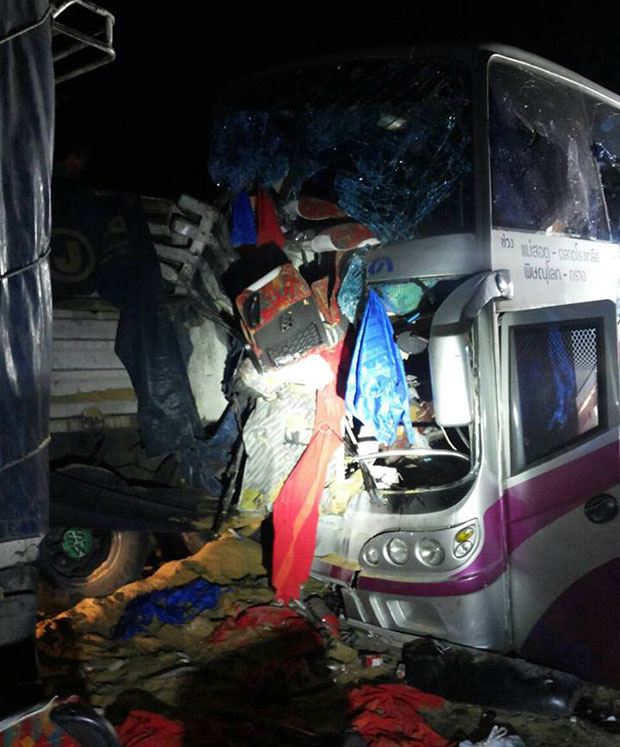 Passengers' baggage lays scattered by the force of the fatal collision between this bus and an 18-wheel truck in Kamphaeng Phet early Tuesday morning. (Photo by Anake Chudokphut via FM91 Trafficpro Facebook page)