Loss-ridden Thai Airways International (THAI) avoided a record net loss in 2015 after its performance in the October-December period posted a net profit, thanks to substantial cost reductions and more efficiencies.

The national carrier posted a net profit of about 4 billion baht in the fourth quarter last year, narrowing its 2015 net loss to about 14 billion, compared with a 15.6 billion baht net loss in 2014, said a company source.

The company posted a net loss as high as 18.1 billion baht for the first nine months of last year.

THAI's board will convene on Feb 29 to announce its operating results in 2015 as well as the company's targets and directions for next year, according to the source.

The results show the company is on the right track in how it has addressed the accumulated losses, the source said.

THAI's Available Seat-Kilometre (ASK), which measures an airline's passenger carrying capacity, declined by 6.2%, while the airline set an earlier ASK reduction target of 15%.

The number of commissioned aircraft dropped 10% and other operating costs dwindled.

However, the airline's passenger numbers climbed 3.7% to 18.42 million last year while the passenger load factor, which measures the capacity utilisation of the airline's seats, rose by 4% to 73%.

Meanwhile, the source said, the recovery has prompted the company to project its profit will reach about 2 billion baht for this year.

The projected profit gets a mention in the company's report sent to Deputy Prime Minister Somkid Jatusripitak, responsible for economic affairs, on Feb 15, according to the source.

The company's total revenue is projected to hit 194 billion baht this year, up 6.5% from 182 billion baht last year, said the source.

Mr Somkid also said THAI has apparently bottomed out and should begin to "take off".

He ordered the company to work out its investment plan in the next five to 10 years, adding the Finance Ministry, which holds the biggest share in THAI, is ready to lend its full support.

The minister also called on the national carrier to work with other airlines to explore flight connections in Asia in line with the policy issued by Prime Minister Prayut Chan-o-cha.

To reach its profit target for this year, the national carrier is employing various approaches, the source said. More alliances for ticket sales will be sought and the target groups will be defined to clearly boost yields.

THAI will try to win additional customers through its website and in new markets and increase revenue from cargo transport, the source noted.

The airline also plans to slash an additional 5 billion baht in costs this year. The company's non-fuel cash cost, excluding leases, is expected to reach 88 billion baht this year.

The company's cost reduction, one of the key factors helping with its recovery, will also be compared with other carriers, while work efficiencies should also improve, such as the merger of units which have overlapping functions. 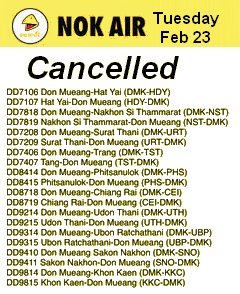 Efforts will be made to reduce maintenance costs and the aircraft sales plan will be tweaked to comply with the company's business needs.

The source said the carrier's long-term plan is to stem losses and increase revenue.

The management system of flight routes, revenue and bookings must be improved, while efforts will be made to set up subsidiary firms or joint ventures to run passenger services, flight catering and its U-Tapao aircraft maintenance depot.

Meanwhile, Civil Aviation Authority of Thailand (CAAT) chief, Chula Sukmanop, said Sunday the agency's staff on Saturday began examining the flight hours of Nok Air pilots to determine whether they were forced to exceed the standard limit on flying.

The inspection was in response to the strike by pilots on Feb 14, which Nok Air said resulted in the cancellation of nine flights leaving hundreds of passengers stranded at Don Mueang airport.

Patee Sarasin, chief executive of Nok Air, admitted some Nok Air pilots had worked over the limit but once this was discovered, they were ordered to stop immediately.