Trat - Five Cambodian fishing crew members were arrested in connection with the rape and assault of French tourists on Saturday night on the resort island of Koh Kut, police said.

The five, whose boat was anchored off the island, are accused of raping two French tourists and attacking another two male tourists who tried to help the women, according to police.

The suspects are thought to have swam the 300 metres from their boat to the shore, police said.

Police last night arrested two of the suspects as they attempted to cross back to Cambodia through the Hat Lek border pass after officials noticed their appearance matched a description provided by the victims.

The two men were escorted to Koh Kut police station. They were identified as Thi, 20, and Bot Man, 20.

Three other Cambodian fishing crew were previously arrested at the crime scene Sunday. They are identified as Yim, 25, Pai, 22, and Jern, 25.

The attack took place about 1km from a resort where the four tourists were staying, police said.

According to an initial investigation, the four tourists were walking along a street on their way to dinner when they came across two suspects who tried to talk to them.

As the tourists were about to leave, another three men emerged from bushes nearby and grabbed the women.

The male tourists, identified as Thomas Buiron, 30, and Edbri Ronain Rene, 29, tried to fight off the attackers but were overpowered.

Mr Buiron said he and Mr Rene were attacked with knives and sticks before they managed to escape and run back to their resort. He said the other man was badly injured.

The women, one aged 57 and the other 28, were raped and severely assaulted before a car passed by, prompting the attackers to flee, police said.

A joint team of police and navy officers as well as about 50 locals sealed off the area around the scene to hunt for the attackers.

Three of the suspects were found on the island and arrested around 5am Sunday, while the other two managed to get away, before being arrested at the border later.

Pol Lt Col Suraporn Thepsen, Koh Krut deputy police chief, said the two suspects arrested at the border are believed to have travelled to Trat's Khlong Yai district from Koh Kut on board their fishing boat.

The suspects, who had been drinking, put on lifejackets and swam to the shore to buy more alcohol before the attack, the officer said.

Police said the three tourists who are severely injured were sent to hospital in Trat's Muang district after receiving initial emergency care on Koh Kut.

A team of investigators has been sent to question the skipper and crew members of the fishing trawler, which is now docked at a pier in Trat's Laem Ngop district.

Doctors at the hospital will provide an update on the condition of the three tourists Monday. 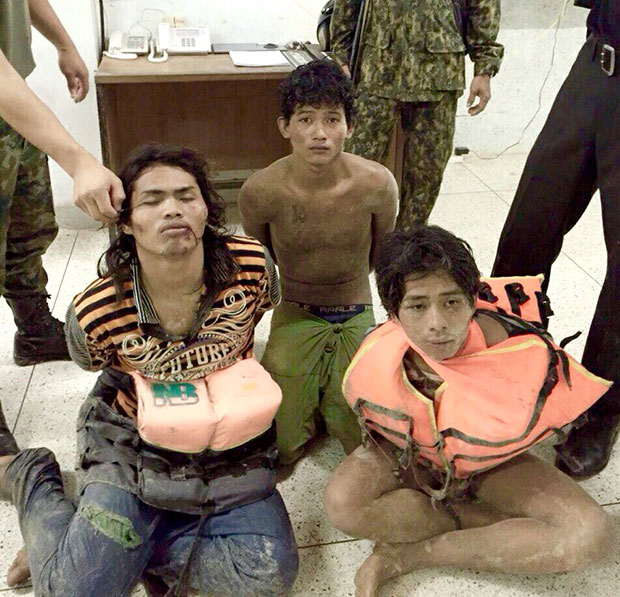 TRAT - Five Cambodian sailors -- three on Koh Kut and two as they were fleeing to Koh Kong in Cambodia -- have been arrested over the alleged rape of two French tourists and assaulting their male compatriots.

The three detained on the resort island of Koh Kut were identified only as Yim, 25, Pai, 22, and Goen 25. They were arrested in a forested mountain area at Moo 5 village of Ban Ao Phrao in tambon Koh Kut between 4am and 5am on Sunday after a 50-strong force of marines, police and administrative officials supported by villagers sealed off their escape route.

Pol Lt Col Suraporn Thepsane, deputy chief of Koh Kut police station, said the two others, named as Tee and Boad Mar, both 20, were captured at Hat Let immigration checkpoint in Trat’s Khlong Yai district at 3pm Sunday as they allegedly tried to flee to Cambodia’s Koh Kong province. He said all five were workers on a fishing boat.

Their vessel had left a pier in Trat’s Laem Ngop district and anchored in Ao Bang Bao of Koh Kut, about 300 metres from the shore to shelter from heavy waves on Saturday afternoon.

According to a preliminary police investigation, the five were drinking liquor on the boat, and after they ran out, they put on life jackets and swam to the shore to buy some more.

They met a group of four French tourists, two women and two men, who were walking around the back of their resort on Saturday night. The area was reported to be dark and desolate. The Cambodian boat crew tried to kidnap the two women, aged 57 and 28, and hurt their male companions, aged 30 and 29, with a butcher’s knife, beating them when they tried to help.

The suspects raped the women after the first man was injured and the second ran for help at the resort.

The attackers fled after a group of resort staff and residents accompanied by the French man came to help. The three victims were found in critical condition and were initially treated at KohKut hospital before transferred to Trat hospital. Doctors said they had undergone surgery and are being treated in an intensive care unit where their conditions is described as satisfactory.

The two arrested in the afternoon will be taken to Koh Kut for questioning. Police believe they returned to the mainland by seeking passage on another fishing boat.

National police chief Chakthip Chaijinda will question the five Cambodians and follow up the case himself on Monday, Pol Lt Col Suraporn said.