Concerns from locals about the influx of Chinese tourist vehicles in the north of Thailand have prompted authorities to step up measures to bring them under control.

The concerns have been mounting after the Chinese New Year holiday early this month when a large number of camper vans and private vehicles from China were found entering the northern border provinces.

It was reported on social media that several accidents took place involving cars that had Chinese licence plates, probably because the drivers were not familiar with local traffic rules. A video clip showing a car with a Chinese licence plate on the wrong side of the road, moving against the traffic flow, was circulated.

Pictures of camper vans -- spotted in the northern cities of Chiang Rai, Chiang Mai and Phayao -- have been shared on social media, not for the large number but because of inappropriate behaviour by the visitors.

In some circulated pictures, Chinese families are seen cooking by their camper van parked at a temple. In Bangkok, some of the vans are found parked in prohibited areas.

This raised controversy over the state policy to boost tourism through open access for Chinese self-driven caravans into Thailand despite the lack of measures to cope with the growing number of tourists and vehicles.

The worries prompted the Land Transport Department (LTD) to launch a draft regulation to regulate tourists' vehicles temporarily entering the country for tourism. The draft will be discussed with state agencies including customs, the Immigration Department, traffic police, and the Tourism and Sports Ministry early this week, said LTD director-general Sanit Promwong.

Under the draft, the vehicles which will be allowed to enter Thailand include passenger cars with no more than nine seats (including the driver's seat), pickup trucks that weigh no more than 3.5 tonnes, and motorcycles.

Each vehicle will need to register for at least 10 days through local tourism business operators prior to entry. Passports, international driving licences, car registration documents and itineraries will also be required. Entry will be limited to 30 days, with a 500 baht fee for cars and pickup trucks and 200 baht for motorcycles.

Motorists who do not have an international licence usable in Thailand must pass driving and traffic rules training at the local LTD office first.

Most Chinese vehicles enter the north of Thailand via the fourth Thai-Lao Friendship Bridge that connects Chiang Rai's Chiang Khong district with Laos' Ban Houayxay -- about 411km, or a six- to seven-hour drive to the Chinese border town of Jinghong.

Jirayut Boonsong, 41, a Chiang Khong resident, complained there are more and more vehicles from China entering Chiang Khong even outside the holidays.

"Local people have complained a lot about road safety issues, as many Chinese tourists break traffic rules. They questioned how government officials allow many foreign vehicles to pass through immigration when the drivers are not aware of local regulations for road safety."

Mr Jirayut once almost clashed with a Chinese vehicle as it suddenly appeared in his lane. He was able to veer his car away.

While residents have become more concerned about road safety and inappropriate behaviour, local business operators complain they do not earn anything from these tourists as they only eat at restaurants and stay in hotels that are run by Chinese people.

After entering Chiang Khong district, Chinese motorists take so-called Road 3 Asia, known as R3A, out of the province for their journey elsewhere in the country.

The road, officially opened in 2008, starts in Yunnan and enters Thailand at Chiang Khong district. According to Chiang Khong Customs, the number of vehicles entering the Chiang Khong border quadrupled from 3,117 in 2013 to 12,103 the following year. 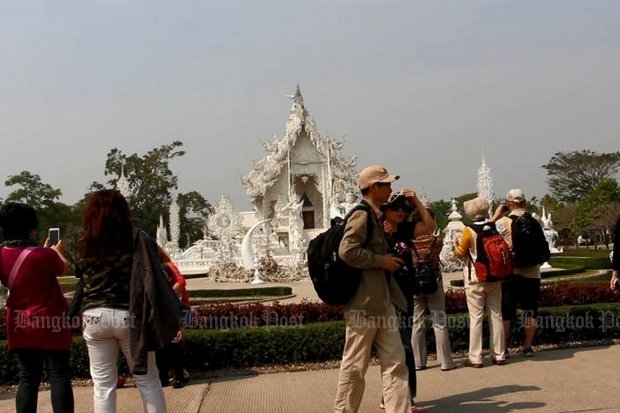 The new Highway R3A from Yunnan province has brought large numbers of Chinese tourist to upper Thailand to see the "white temple" at Chiang Rai and other sites. But many are witless drivers with no knowledge of Thai road rules. (Post Today photo)

"Tourism growth forced us to welcome Chinese vehicles even though the two counties have no agreement for the free passage of vehicles," said Pol Col Nattharit Pinpak, superintendent of Chiang Khong Immigration.

Currently, Chinese drivers who want to enter Thailand via Chiang Khong customs must present documents to prove they own the vehicles, show their registration papers, driving licences and other documents. They have to attend a 15-minute training session on Thai traffic rules.

By contrast, Thai vehicles entering China face a much more complicated process. Driving permission and licences must be requested from the Chinese government three months in advance. Itineraries must be submitted and strictly followed. Deposits must be placed during entry at Chinese immigration which are returned to the vehicle owner when leaving China. Despite the influx of Chinese caravans, local operators reap few benefits.

At the Chiang Khong entry point, the immigration office can earn 1,000 baht for a short-term tourist visa with 15 days' validity. Some insurance companies sell insurance for 400 baht per vehicle.

"We don't see any benefits from opening up the roads to the Chinese," said Surapol Temsawasdi, vice chairman of Phayao's Chamber of Commerce.

He said he suspected tourism is a secondary purpose for some Chinese visitors and sizing up prospective business opportunities is their main priority.