China should supply the bulk of the investment needed for a planned railway from the Thai-Laos border to the Gulf of Thailand as the project will benefit Beijing, Transport Minister Arkhom Termpittayapaisith says.

The proposed line, part of China's efforts to expand infrastructure in Southeast Asia, would cover 845 kilometres from the Thai-Lao border to the Rayong province's industrial centre.

Mr Arkhom told Reuters in an interview Monday that China and Thailand were still negotiating a 60-40 shareholding plan and that the railway would be a high-speed one, rather than mid-speed as originally discussed.

"As this project benefits them (the Chinese), they will have to invest more because this is a strategic route that will benefit China," Mr Arkhom said. 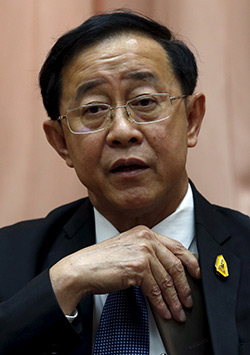 Thailand's Transport Minister Arkhom Termpittayapaisith gestures during an interview with Reuters at the Transport Ministry in Bangkok Feb 29. China should supply the bulk of the investment needed for a planned railway from the Thai-Laos border to the Gulf of Thailand as the project will benefit Beijing, he said. (Reuters photo)

China has put the project cost at 560 billion baht, according to Mr Arkhom, but Bangkok thinks that figure is too high.

Mr Arkhom said China wants Thailand to finalise the rail deal quickly before any change of government will disrupt the project, adding that construction is expected to begin in May.

Chinese Foreign Ministry spokesman Hong Lei, asked about Mr Arkhom's remarks, said he hoped the project could be implemented as soon as possible to benefit the two countries and the region.

"After the Thai railway is constructed, it will benefit Thailand's social and economic growth and make Thailand the centre of regional connectivity," he told Tuesday's daily news briefing in Beijing.

In December, there was a groundbreaking ceremony in Vientiane, for a chain from a border town in China to the Lao capital. Such a train, combined with a new one in Thailand, would connect China with the Gulf of Thailand.

For its part, Thailand is trying to increase spending on infrastructure to boost its struggling economy.

But critics have said the touted railway project is not financially viable. Korn Chatikavanij, a former finance minister, told Reuters in January that Thailand isn't leveraging its strong bargaining position in the project.

Mr Arkhom said the high-speed line "will change travel and logistics in Thailand" as well as generate revenue.

In Thailand, some will be looking at China's winning of a US$5.5 billion high-speed rail project in Indonesia as a test of its ability to operate in Southeast Asian countries.

China beat Japan for the contract to build Indonesia's first high-speed railway, but construction in was halted a week after a groundbreaking ceremony took place in January due to paperwork not being finalised.