A taxi boat driver looks on as police officers and officials inspect a boat after its engine exploded at the Wat Thep Leela pier on Saturday. (EPA photo)

At least 60 people were injured on Saturday when the engine on a gas-powered Bangkok commuter boat exploded, pitching several passengers into Khlong Saen Saep.

The blast occurred at around 6.20am near the Wat Thep Leela pier near Ramkhamhaeng Soi 39 in Bang Kapi district. Khlong Saen Saep is one of the capital's busiest waterways for commuters.

The city's Erawan Emergency Medical Centre said at noon that 66 people had been hurt and were being treated at five hospitals. Among the injured were three foreigners, including a Japanese male and two women from Myanmar, it said.

Images provided by police showed that the boat was rattled by the explosion but still largely intact.

Boat services at all piers along Khlong Saeng Saep were still operating normally, except at the Wat Thep Leela pier where LNG had to be released from the damaged craft.

Sanit Mahathavorn, acting chief of the Metropolitan Police Bureau, said an initial investigation found the explosion was caused by a gas leak at the rear of the boat, according to INN News.

Most of the injured passengers sustained burns on their bodies, he said.

The boat, operated by Family Transport (2002) Co, was travelling from the Wat Sribunruang pier to Pratunam when the explosion occurred in the engine room near the Wat Thep Leela pier. (Story continues below) 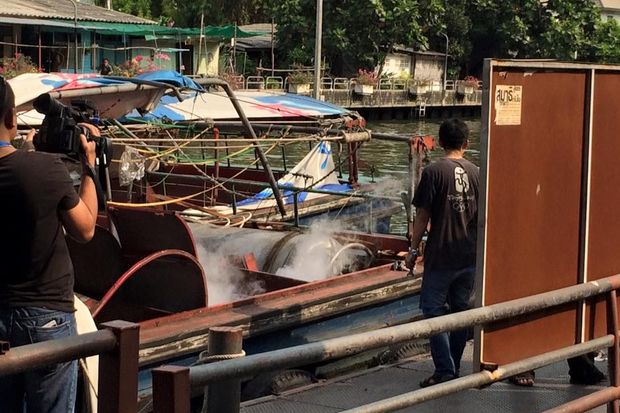 Police and officials inspect a taxi boat after its engine exploded, at the Wat Thep Leela pier on Saturday. (EPA photo)

Police were questioning the engineers who assembled the company's boats to see whether the vessels had been inspected regularly and whether their tanks met the standards, said Pol Gen Satit.

Booths were set up as contact centres at the Wat Thep Leela pier and at Hua Mak police station so people could check the victims' names and notify authorities of any missing persons.

Nat Chubchai, deputy director-general of the Marine Department, which supervises marine transport, said the cause was likely a gas leak but authorities had yet to find out how it happened.

"We will set up a panel to look into the incident. As for reports of missing persons, divers have confirmed initially there were no victims in the water."

Family Transport has 70 boats plying the Saen Saep canal. There were unconfirmed reports that all of its 30 LNG-powered boats have been suspended from service.

But Deputy Transport Minister Ormsin Chivapruck clarified at noon that Family Transport was told to switch to using diesel on all of its boats and keep providing services normally as a service suspension would affect a lot of people.

He explained that his company had been using LNG without incident for some time.

"Its use had been approved properly by authorities and the installation was supervised and checked by experts including PTT Plc," he said, adding that he personally believed the flaw was limited to just the one boat.

"Our staff are visiting the injured at hospitals. We sincerely apologise to the people and vow to find better preventive measures."

A video clip from a closed circuit camera shows the moment when the engine of a boat exploded at Wat Thep Leela pier.