A crime that is paying off
Thailand
General

A crime that is paying off

Two years and one month after the February 2014 political violence at Laksi intersection, Vivat Yodprasit was found guilty by the Criminal Court of crimes associated with the incident and sentenced to 37 years and four months in jail.

His name might not ring a bell. But “the popcorn gunman” will not be forgotten easily.

Vivat’s crimes were read out by a panel of three judges who spent 40 minutes detailing the evidence gathered by police, the testimonies of his two brothers and his own TV interview admitting that he was a popcorn shooter. 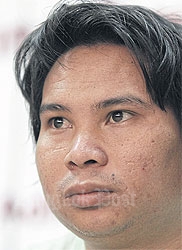 The Laksi incident took place on the eve of the Feb 2, 2014 general election and was one of the hot zones during the People’s Democratic Reform Committee (PDRC) street protests that led to a military coup by then army commander Prayut Chan-o-cha three months later.

The PDRC protest against the Yingluck administration was split into several camps which had their own leaders, such as activist monk Buddha Isara who led a group of demonstrators to Laksi. The Phra Buddha Isara camp went there to prevent government officials from gaining access to Laksi district venues to distribute ballot boxes and prepare for the poll.

An unidentified group of armed men was spotted at the scene and appeared to be protecting the anti-election protesters from other gunmen targeting them. The pro-protester gunmen were nicknamed the “popcorn shooters” because they concealed their firearms inside empty popcorn sacks.

Vivat was said to be the only one who could be identified through photos taken and circulated.

He was arrested in March that year at a local market in Surat Thani’s Muang district and indicted for murder and illegal possession of an assault weapon and ammunition used in the Laksi shootout. The shooting had wounded Akaew Sae Liew, a bystander who died seven months later, and three other people.

The sentence for Vivat was reduced from the original life imprisonment due to his confession during the police investigation.

Since his arrest, Vivat is reported to have received assistance from the protest camp led by Phra Buddha Isara, and this is acknowledged by PDRC leader Suthep Thaugsuban who initiated the Muan Maha Prachachon fund to raise money for the victims of political violence.

However, after the court sentence, other protest groups such as the People’s Alliance for Democracy and the Network of Students and People for Reform of Thailand expressed an interest in helping.

Despite the guilty ruling, the anti-Yingluck demonstrators feel they owe him.

According to a source close to the issue, a meeting has been called to discuss assistance measures for Vivat and his family and it is believed it will be attended by key PDRC members including Akanat Promphan and political cartoonist “Chai Ratchawat”, or Somchai Katanyutanan.

There is an agreement among supporters that funds be raised to help the popcorn gunman, but there is one small thing that needs to be settled: Who should supervise the account?

According to the source, the PDRC representatives have reserved their opinions on this, knowing that Vivat already has help.

When word got out that groups of people allegedly using the PDRC name were trying to raise funds to help him, Vivat put a stop to it. Through his lawyer, he said firmly he did not need assistance.

It is reported that Vivat’s move is supported by the PDRC and Phra Buddha Isra who are concerned the fundraising move may backfire and be exploited by ill-intentioned groups for political gain.

The controversy surrounding the nomination of Somdet Phra Maha Ratchamangalacharn as the next supreme patriarch took a bizarre twist when Prime Minister Prayut Chan-o-cha was accused of being a non-Buddhist bent on derailing the entire process. 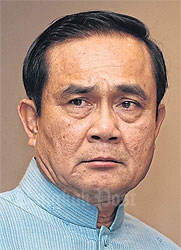 This was somewhat baffling to the prime minister, who maintains that he has not converted to another religion.

The government has shelved the Sangha Supreme Council’s (SSC) nomination of Somdet Phra Maha Ratchamangalacharn, known as Somdet Chuang, as supreme patriarch as the Department of Special Investigation looks into a luxury car tax evasion allegation against him.

Somdet Chuang was linked to the case after his signature was found on an illegal registration form for a vintage Mercedes-Benz he owned.

The DSI will visit the 90-year-old abbot of Wat Pak Nam Phasicharoen at his temple on March 16 to question him about the Mercedes-Benz.

Rubbing salt in the wound, the Office of the Ombudsman recently declared the SSC’s nomination of Somdet Chuang for supreme patriarch was unlawful.

Gen Prayut has made it clear he will not submit the supreme patriarch nomination to His Majesty the King for royal endorsement until the top monk clears his name, in order to keep unresolved disputes away from the King’s attention.

The rumour that Gen Prayut was a non-Buddhist was thought to have originated from those who were disgruntled with the decision to halt the nomination.

They claim the delay is an attempt to stir a rift in the monastic community, fuelled by the allegation that Gen Prayut is a non-Buddhist.

A photo of Gen Prayut and his wife Naraporn holding the palms of their hands open in a gesture to receive blessings from Chularatchamontri Aziz Phitakkumpon, the spiritual leader of Thai Muslims who recited a prayer for them during a recent event has been shared widely on social media.

A photo of his wife attending an Asean meeting in Malaysia, and a picture of Gen Prayut wearing a taqiyah Muslim cap as well as a Muslim wedding hat while greeting Muslim visitors at Government House also went viral, showing an apparent attempt to falsely portray Gen Prayut as a Muslim.

This prompted the prime minister to explain matters during his Return Happiness to the Nation weekly television programme last week.

During a media briefing on Tuesday, Gen Prayut again spent time explaining his position: “There are rumours I have already converted to Islam. On that day, Muslim visitors asked me to wear the Muslim wedding hat. Some then said I had become a Muslim. Be fair to me,” Gen Prayut said.

He insisted he will not submit the nomination for supreme patriarch to the King as long as the controversy surrounding the monk remains unresolved.

A kind of dead cat bounce

Being head of the country’s economic leadership team bears a heavy responsibility. One wrong move could mean damaging losses for those bound by a passion to speculate.

Deputy Prime Minister Somkid Jatusripitak is tasked with steering Thailand’s economic course, leading the economic ministries in negotiating bends and curves and tiptoeing around obstacles and quagmires strewn along the bumpy road to recovery. 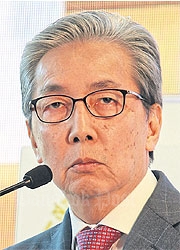 Mega-transport infrastructure projects and the promotion of business opportunities for small and medium enterprises have kept the deputy prime minister busy as the government works hard to stimulate the slow-moving economy.

He has gone overseas to put out the word to foreign investors that Thailand is still an ideal place to invest.

Of late, Mr Somkid’s working itinerary has spurred intense interest among those hoping to cash in on his visits to various agencies.

A case in point was his visit in the middle of last month to Thai Airways International’s (THAI) head office. Tagging along was Finance Minister Apisak Tantivorawong in what some observers regarded as a low-key call on the financially-troubled national carrier.

It struck those familiar with the matter as a visit designed to spread good news about the airline which has been deep in the red for some time.

He announced the airline had bottomed out after reaching its lowest ebb, and was successfully addressing critical problems and deficiencies that had held the company back and dragged it down.

The deputy premier also declared this year would see THAI fly back into the black as some budget-intensive and non-urgent investment plans are put on hold, aircraft deliveries requiring large pay-outs are deferred and flight routes are expanded, creating more room for growth.

After this bit of good news was made public, the airline’s stock price soared from 7-8 baht a share to above 12 baht at the end of last month. However, reality soon set in for stock traders — the airline was still reeling from its financial woes.

Sources at THAI said Mr Somkid’s visit had boosted public confidence in the company, which was reflected favourably in the upswing in the airline’s share price.

Some stock traders had speculated that the good news would push up THAI’s share price and decided to buy for profit.

In fact they were so enthusiastic that they began asking which agency Mr Somkid would head to next.

It turned out Mr Somkid was scheduled last week to visit the Transport Ministry to get an update on the electric train projects. Stock traders hot on Mr Somkid’s trail were expecting encouraging news from the deputy prime minister.

They proceeded to purchase stocks in those firms contracted to build the train projects, only to be told that Mr Somkid had cancelled his planned visit to the ministry at the last minute.

It appears Mr Somkid possesses the ability to sprinkle share-price raising glitter over stock traders, and to add much-needed excitement on the share trading scene.

Enthusiasts are still watching to see where Mr Somkid will go next.