Bodies of the disaster victims were laid just outside the bank's doors by paramedics late Sunday. (Photo by Thanarak Khunton)

Firemen responding to the alarm were delayed in breaking in while they conducted tests to try to find out if there was a fire but they detected no heat.

Reports said there was smoke coming from the basement of the low-rise building at around 9.30pm Sunday. A bank statement stated there was no fire or explosion.

Initial reports said eight people died at the scene and seven were taken to hospitals.

Firemen said when they finally began breaking into the bank building, they found tightly locked doors by bank-grade security. They managed to rescue three people on the ground floor but could not access either the basement or first floor.

Within 20 minutes, firemen had pulled out three unconscious victims of the fire retardant, as well as the bodies of a woman and two men already overcome.

Other bodies were found in the next 20 minutes

According to an official statement by SCB, this was "an accident caused by the negligence of the contractor hired to improve fire protection of the building". It gave no further details.

The bank issued a press release late Sunday night, saying there was no fire or explosion, so all banking offices would be open on Monday as usual.

The statement added condolences for the victims. The bank's chief executive will hold a press conference on the incident Monday morning. 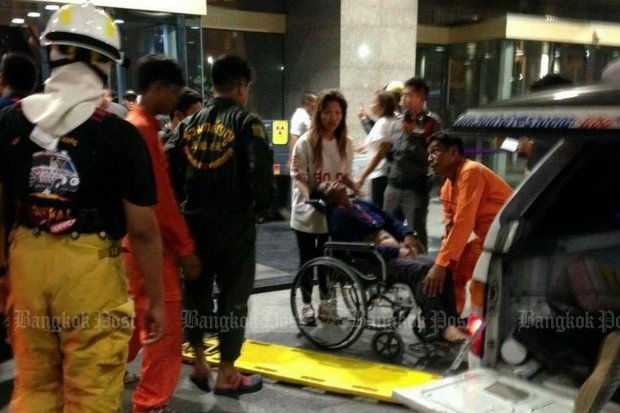 Paramedics prepare a survivor to be taken to hospital. (Post Today photo)