Senior officers of the Metropolitan Police Bureau, led by acting city police chief Lt Gen Sanit Mahathavorn (left), inspect the headquarters of Siam Commercial Bank in Bangkok on Monday after the fatal leak of fire retardent chemical that killed eight people on Sunday. SCB president Yol Phokasub is on the right. (Photo from the bureau)

The result of the police investigation into the fatal chemical leak from the fire-extinguishing system at Siam Commercial Bank's head office in Bangkok on Sunday night should be known by next week, acting Metropolitan Police chief Pol Lt Gen Sanit Mahathavorn said on Monday.

Eight people were killed and many others left needing medical treatment after fire retardant was released into a document security vault in the basement of the SCB Park building, drawing the oxygen out of the air.

Pol Lt Gen Sanit said the police were trying to establish what caused the chemicals to be released. He said some witnesses had already been questioned, and statements would be sought from others.

"It's too early to say who is to blame. We need time for experts to investigate the details," he told AFP.

SCB blamed the accident on contractors who had been working to upgrade the building's chemical fire-extinguisher system but mistakenly set it off, releasing a chemical retardant designed to starve any fire of oxygen.

"The work may have triggered the Pyrogen aerosol which, once it works, will decrease oxygen, that could cause people's injuries and death," the bank said in a statement.

Pyrogen manufactures a type of aerosol fire extinguisher used in places where water would damage documents or electrical equipment. The company says on its website that its aerosol does not deplete oxygen. But it also advises against using it in occupied rooms and says "accidental exposure should be limited to five minutes". 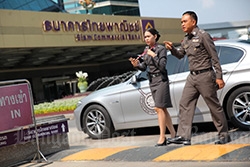 Bangkok's Erawan emergency medical centre said five people were killed at the scene while three others died in hospital. Police say seven of those killed were contractors, including one woman. The eighth victim was a bank security guard. Four workers were critically injured.

Lt Gen Sanit said if the Office of the Forensic Science reports that recklessness was the cause, people involved in the installation of the system would be investigated and might be charged for the deaths.

Pol Maj Gen Charoen Srisasalak, commander of the Metropolitan Police Division 2, said Phahon Yothin police had questioned 10 people on Monday morning -- three SCB employees who were at the scene on Sunday night, and seven relatives of the dead victims.  Security camera footage was also being examined.

He said they provided useful information, but would not give details.

Investigators reported that Mega Planet Co had been contracted to set up the fire prevention system, but another company was sub-contracted to complete the work.

The sub-contractor, designers of the building and safety engineers would also be summoned to testify.

Pol Col Panudet Sukwong, the Phahon Yothin police chief, confirmed investigators were still questioning people and said no charges had yet been laid.

A fire damaged the 10th floor of the SCB Park building in February last year.

CHIANG MAI: A van crashed on the way back down from Doi Ang Khang in Fang district, killing one tourist and injuring eight others on Monday morning, police said.

Myanmar's junta jailed ousted leader Aung San Suu Kyi for four years for incitement against the military and breaching Covid rules, the first of a series of possible sentences.

Thailand has detected its first case of the Omicron coronavirus variant in a US businessman who entered the country from Spain.