Lt Gen Manas Kongpan, a suspected human trafficker, is escorted by officers as he arrives for a hearing at the criminal court in Bangkok on Tuesday. (Reuters photo)

The trial of 92 suspected human traffickers, arrested after the discovery of shallow graves of migrants in a southern jungle, began in Bangkok on Tuesday and the attorney-general's office said it would be over within a year amid fears about the safety of witnesses.

Traffickers abandoned boatloads of migrants at sea last year after a crackdown by authorities that led to a regional migrant crisis with Thailand, Indonesia, Malaysia, Myanmar and Bangladesh refusing boats permission to land.

Rights groups had expressed fears that a drawn-out case, lasting anything up to two years, could put the hundreds of witnesses at risk because of inadequate police protection.

"The court is accelerating the case to finish within a year," said Prayut Porsuttayaruk, deputy director-general of the human-trafficking office at the Attorney General's Office.

Thailand remains on the lowest tier on the US State Department's Trafficking in Persons report for not meeting the minimum standards for the elimination of trafficking. 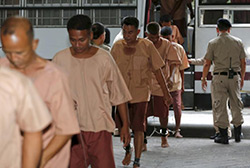 Sunai Phasuk, senior researcher on Thailand at Human Rights Watch, welcomed a shorter trial but said the cases should not be rushed to impress the United States.

"It will totally send the wrong message if the trial is being fast-tracked simply to impress the TIP report reviewers."

The defendants, wearing beige prison uniforms, were brought to the packed court for the start of formal hearings.

The investigation and arrests followed the discovery of 30 shallow graves at a trafficking camp near the Malaysian border. Many of the bodies were believed to be of Rohingya, a persecuted ethnic Muslim minority in majority Buddhist Myanmar.

Weeks later, police revealed 139 graves had been found over the border in Malaysia.

That led to a crackdown on the multimillion-dollar trade which had until then flourished in the South and in Malaysia. The 92 suspected human traffickers include an army general, civilians and police.

Rights groups have called on authorities to step up witness protection after some witnesses said they had been forced into hiding because of threats.

Mr Prayut said the justice ministry was "looking after the witnesses", but did not say how many of the more than 400 witnesses were receiving police protection.

Around 50 suspects were still at large, said Mr Prayut. Some had fled to neighbouring Myanmar.

The United Nations and rights group say the number of migrants leaving Myanmar and Bangladesh by boat in past months has plummeted because of the Thai and Bangladeshi crackdowns on human smugglers.

The number of people trying to flee was expected to be significantly lower this year, they said.