Elderly Finn falls to his death from Jomtien condo

Plainclothes police question the neigbhours of a Finnish man who fell to his death from a condominium at Jomtien beach in Pattaya, Chon Buri, on Tuesday. (Photo by Trinai Jansrichol)

CHON BURI - An elderly Finnish man fell to his death from the 10th floor of a condominium building on Jomtien beach in Pattaya on Tuesday.

The 79-year-old, whose name was with held pending  notification of his family, was found dead on the ground at the bottom of a 18-storey condominium at Boonakanjanaram in Jomtien area of tambon Nong Phrue in Bang Lamung district, said Pol Lt Nakhonrat Nonseelad, deputy chief of investigation at Pattaya police station. The incident was reported around 10am on Tuesday.

Officers went to his room on the fourth floor. A handwritten letter was found in the room. There were no signs of a struggle. 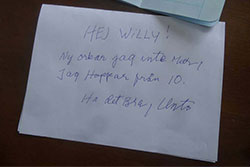 A farewell handwritten letter is found in the room of a Finnish man who jumped to his death in Pattaya, Chon Buri. (Photo by Trinai Jansrichol)

The farewell letter written to a foreign friend identified only as Willy said he would no longer live in this world and would jump from the 10th floor of the condominium. Police went to the 10th floor and found a damagd slide window to a balcony.

An investigation revealed the man had lived alone in the condominium room for about 10 years. He had suffered chronic illnesses. Two days ago, he was rushed to a hospital after suffering head injuries from a fall inside his room.  He often complained to his friends that he did not want to live anymore.

Police believed stress from poor health might have driven the man to commit suicide. His body was being sent to  Police General Hospital’s Forensic Medicine Institute in Bangkok for post-mortem examination, and police were informing the Finnish embassy.