Kriangkrai Techamong, left, talks with Chalor Kerdthes, right, before his ordination in Lampang province on Thursday. (Photo by Aswin Wongnorkaew)

Kriangkrai Techamong, convicted of stealing US$20 million in gems and jewellery from a Saudi Arabian palace nearly three decades ago, was ordained a monk on Thursday, a move he hoped would change his luck.

The former janitor at the palace in Riyadh entered the monkhood at Wat Tha Makwaen in tambon Mae Pa of Thoen district in Lampang, his home province. The 60-year-old said he intended to remain a monk indefinitely and leave his family behind. He said that he believed bad luck had followed him since the infamous "Blue Diamond Affair". He repeatedly suffered problems, including a severe car crash with a big truck early this year from which he narrowly escaped death, he said.

The ordination was meant to save his own life and make merit for the spirit of the people who had died in connection with the Saudi jewellery heist, Kriangkrai said.

Former police major general Chalor Kerdthes met him at the Buddhist temple on Thursday to seek his forgiveness. The 78-year-old partially paralysed man said from his wheelchair that he had not seen Kriangkrai for about 25 years and would like the latter to forgive him for his past offences against him. 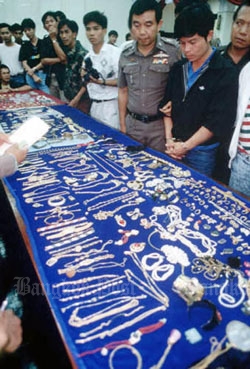 Kriangkrai and Saudi Arabian jewellery as seen in 1990

In 1989, Kriangkrai sneaked into the home of Saudi Prince Faisal late at night and stole the gems that he later smuggled jewellery into Lampang, triggering a feud between Thailand and Saudi Arabia dubbed the "Blue Diamond Affair" that has yet to be resolved.

Police later returned some of the jewels, but Saudi officials claimed most were counterfeits while the whereabouts of the most precious gem -- a rare 50-carat blue diamond -- remains unknown.

Saudi Arabia has long accused Thai police of bungling its investigation, with widespread allegations at the time that the stolen items were snapped up by senior officers.

Riyadh sent a businessman to conduct his own investigation, but he disappeared in Bangkok days after three Saudi diplomats were shot dead, execution style, in the city.

In 2014 a case was dropped against five men, including a senior Thai policeman, for alleged involvement in the businessman's murder over lack of evidence. The decision came after a last-minute change in judge.

Saudi Arabia has not sent an ambassador to Thailand for decades and restricts travel between the two countries because of the unresolved theft and murders.

In 2009, Chalor was sentenced to death by the Supreme Court for murdering Darawadee Srithanakhan, the wife of a gem trader, and her son, Seri, in 1994. The sentence later was reduced to 50 years by a royal pardon.

Darawadee's husband, Santi Srithanakhan, allegedly purchased some of the 500 million baht worth of jewels that Kriangkrai stole.

Chalor was released on parole in 2013 after being jailed for 19 years due to age and illness. He said he shared Kriangkrai's belief that Saudi jewellery and gems brought bad luck to those who were not their real owners.