The State Railway of Thailand (SRT) will propose seven dual-track railway routes to the cabinet for its approval this month.

SRT Governor Wutthichart Kalayanamitr yesterday said the seven double-track rail lines will be submitted to the Transport Ministry before being forwarded to the cabinet.

If the submissions are approved, bidding for the seven rail routes will be held.

The SRT planned to propose the seven railway projects after Prime Minister Prayut Chan-o-cha exercised Section 44 of the interim charter to fast-track them. 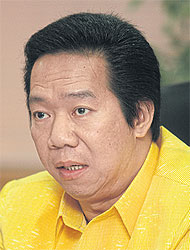 Wutthichart: All projects must undergo EIAs

Under the order, the bidding and the environmental impact assessment (EIA) are able to be carried out simultaneously.

"The bidding will be held for all seven projects after being approved by the cabinet," Mr Wutthichart said.

"However, only three routes will be constructed as they already underwent EIAs."

As for the other four lines, the bidding and the EIAs will be carried out at the same time in a bid to shorten the duration. Contractors will be finalised before the EIA results come out.

Mr Wutthichart, however, insisted that every project must undergo an EIA before it is signed off.

Commenting on the progress of the Red Line railway linking Bangkok to Pathum Thani, the SRT governor said the agency will also sign a contract with the MHSC Consortium, which is contracted to supply the electrical and mechanical system and train carriages for the route, this month.

He said the SRT is in the process of setting the date for a contract signing ceremony.

For two high-speed trains from Bangkok-Hua Hin (211km) worth 94.6 billion baht and Bangkok-Pattaya-Rayong (193.5km), Mr Wutthichart said the projects will be constructed under Public-Private Partnerships (PPPs).

The agency is working on the projects' details which were expected to be completed next month.

The issue will be then forwarded to the State Enterprise Policy Office to set up a PPP committee to oversee the projects.

Meanwhile, Pakpoom Srichamni, president of Sino-Thai Engineering and Construction PCL, said bidding for the seven dual-track railway routes was regarded as a good opportunity for the construction investment sector.

"If the state is able to launch those projects in accordance with their frameworks, it will give the government more credibility. More private firms will invest in the state's projects," Mr Pakpoom said.