Thousands back return of Muslim school

With a long history as an Islamic boarding school, Jihad Witaya pondok stands as a symbol of Muslim defiance of Bangkok, along with Krue Se and Tak Bai. It is also said to have been a terrorist training ground with a connection to the army base raid in 2004 that reignited the southern insurgency. 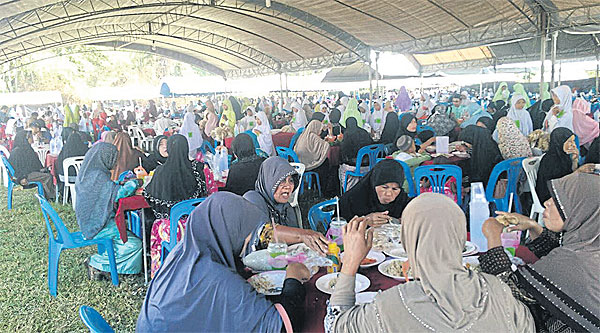 fight for rights: Thousands of people turn out in a show of support for Jihad Witaya school, which was seized by the authorities last December.

The 15 rai of land that housed the school was seized by the authorities in December, driving another wedge into relations between the local Muslim community in the troubled South and the government of Thailand.

Now Jihad Witaya has become a rallying cry for insurgents, alongside Krue Se, the mosque in Pattani where 32 Muslims died in a hail of gunfire in 2004, and Tak Bai, where 85 young Muslims suffocated in the back of military trucks after being arrested in a protest and taken to military camps.

Local Muslims are not ready to let Jihad Witaya die. Yesterday they held a Khao Yam party in Yaring district to raise awareness of the boarded up school and its importance to their lives. The locals want to buy a new plot of land for the relocated school, as they do not want to return to the "tainted" land.

The family that owned the school, which was closed by a court order in 2006, called on residents from nearby provinces to join the party and give support to the Pattani families which oppose last year's official seizure of the school property.

Thousands of people, most of them from Pattani, gathered on a vast and dusty coconut field next to a soccer field in tambon Tha Dan. Dozens of tents were set up to sell food and recall the history of the pondok, which was established 48 years ago.

The organisers said they hoped to raise millions of baht from the Khao Yam luncheon for the Waemanor family which owned Jihad Witaya.

After the infamous raid on the southern army base in which four soldiers were killed and scores of military weapons stolen, the school was said by security officials to be a breeding ground for the Barisan Nasional Revolusi (BRN) independence group that operates out of rugged border country in Malaysia. On Dec 15 last year, the Civil Court ruled that under anti-money laundering laws it was confiscating the school’s 15 rai of land.

Yesterday's party was a rare occasion in the South given the tight security enforced under the Martial Law and Emergency Decree and the ban on political gatherings imposed by the ruling military regime.

In an effort to sway people from joining the event, 35 districts were ordered by administrative officials to organise alternative non-violence promoting events.

Den Tohmeena, 81, a veteran politician who has long represented the region, said the impact of the closure of Jihad Witaya had created a feeling of bitterness among southern Muslims in the manner of the Krue Se and Tak Bai incidents.

“Of course, the court's decision was made upon the evidence and documentation, but it was the officials who prepared those, and they should be held responsible for driving in the wedge,” the former MP said at the party.

Romuelah Saeyeh, wife of controversial jailed activist Anwar Hayitah who supports the BRN, said there was a similarity between Anwar's plight and the seizure of the school's land.

“Anwar has sent a message of solidarity to Balyan [the school's former administrator and grandson of the school's founder], sharing his sympathy with the family,” Ms Romuelah said.

She said it was intriguing that so many had turned up for the party as rumours had circulated that there might be a security crackdown, similar to Tak Bai in 2004.

Ahmad Hassan, president of the Jihad Witaya Alumni, said he felt a deep sense of gratitude to Bueraheng Jeh-Asae, the founder of the pondok who raised him as an orphan. "Babo Heng [the founder] was determined to change the areas to a religious and devout society, but he was eventually gunned down in 1979,” Mr Ahmad said.

Balyan Waemanor said his family had been targeted by the government for several decades. His grandfather, Bueraheng, was gunned down, his father was framed as a trainer of insurgents and his brother was also shot dead. “We don’t know if we’re going to use the name jihad at a new place. But at least people have now given a new meaning to 'jihad' as a way of peaceful struggle as shown today at the party,” Balyan said.

Abdulgoha Awaebuteh, a lawyer at the Muslim Attorney Centre, said authorities didn’t understand the bond between the community and the school, which was also a spiritual centre.