Thailand to go it alone on Thai-Sino high-speed rail

The high-speed rail project has been touted as a joint Thai-Chinese operation since the junta first promoted it, but now will be all-Thai because of unsuccessful haggling over cost sharing. (File photo)

Thailand has decided to wholly invest in the Thai-Sino railway project after it failed to agree in talks with China on the terms of the arrangement which has set back progress for months.

The decision was announced Wednesday by Prime Minister Prayut Chan-o-cha as he was attending the first Mekong-Lancang Cooperation (MLC) summit in Sanya, Hainan province. "Lancang" is Chinese for Mekong

The summit, which brings together leaders from Laos, Vietnam, Cambodia, Myanmar, Thailand and China, ends Thursday.

Gen Prayut said after a meeting with his Chinese counterpart Li Keqiang that, as well as cooperation on sharing resources from the Mekong River, Thailand and China also discussed the development of the Thai-Sino railway project in Thailand.

It was decided Thailand will wholly invest in the project and hire China to develop the project, instead of a joint investment venture planned earlier, Gen Prayut said.

This is because Thailand wants the country's first high-speed train project to "get off the ground", Gen Prayut said.

The first section to be developed will be the 250km Bangkok-Nakhon Ratchasima section, the prime minister said.

Previously, Thailand made a proposal to the Chinese authorities that China should hold a 60% stake in a special purpose vehicle, or SPV, for the project but China disagreed.

The loan issue has played a part in delays in the Thai-Chinese train scheme as the government repeatedly urged China to cap the interest rate at 2%. The government argued China was pushing for too high a rate, and the negotiations failed to make progress. 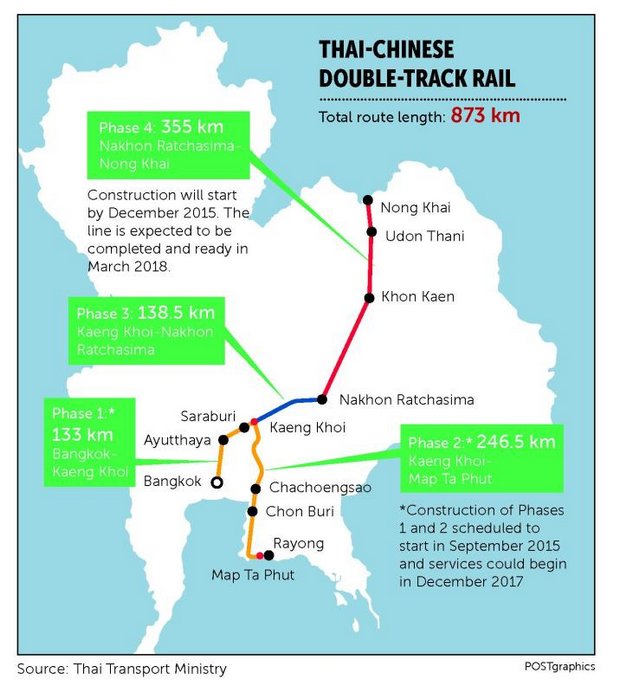 This graphic shows the plan for the joint Thai-Chinese high-speed railway as of last July. The plan now is largely out the window, after China's participation has been axed.

At the MLC meeting, Gen Prayut said China and other countries on the lower Mekong River basin should cooperate on water management of the river for long-term benefits.

In his speech, Gen Prayut reiterated the need for "constructive" cooperation among all Mekong countries. How to manage water resources to benefit everyone was a challenge for the meeting, he added.

Gen Prayut called for a centre for cooperation on water management for countries using water from the river.

Meanwhile, activists have called on the six leaders of the Mekong sub-region to suspend all dam projects in the lower basin, saying the dams stand to affect the livelihoods of people along the river.

"The construction of 12 dams in the lower Mekong River, including the Xayaburi and Don Sahong dams in Laos, is likely to be completed in one or two years,'' said Ormboon Thipsuna, a member of the Northeast Community Network of the Mekong River Basin. Speaking at a forum in Bangkok Wednesday, she said: "The situation will worsen if the whole basin is controlled by China because its government is exploiting the river."