Phnom Penh shut down the entrance to the Hindu ruins from Si Sa Ket's Kantharalak district in 2009 due to border conflicts in the area. The row culminated in a legal battle at the World Court in The Hague. 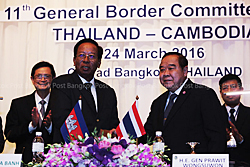 Gen Prawit Wongsuwon (right) and Gen Tea Banh shake hands after a meeting of the General Border Committee at the Thai Defence Ministry on Thursday. (Photo by Pattanapong Hirunard)

Until now, tourists in Thailand could only go as far as Pha Mor E-daeng cliff at Khao Phra Viharn National Park in the district bordering Cambodia to see the Unesco World Heritage site from afar. They had to go to the Cambodian side to reach the temple.

Gen Tea Banh said after a meeting of the General Border Committee with Defence Minister Prawit Wongsuwon at the Thai Defence Ministry that the two governments were already in talks to reopen access from the Thai border. But the Cambodian minister did not give a timeframe for the conclusion of the negotiations.

Gen Prawit said because of warmer relations between the two countries, there was now a chance for tourists from Thailand to travel directly to the temple.

Thailand and Cambodia are celebrating 65 years of diplomatic ties this year.