Pibulsongkram Rajabhat University students talk to police investigators at Muang police station about three officers who allegedly beat them March 18 and fired shots to threaten them. (Photo by Chinnawat Singha)

PHITSANULOK -- Three police officers accused of firing on a carful Rajabhat University students and then beating them have been transferred pending an investigation.

Pol Maj Gen Adisak said criminal and disciplinary inquries into the March 18 incident have begun and he promised to ensure justice for both sides. Related complaints also would be investigated, he added.

In one related case, one of the three officers accused the students of ramming their police car and trying to flee. 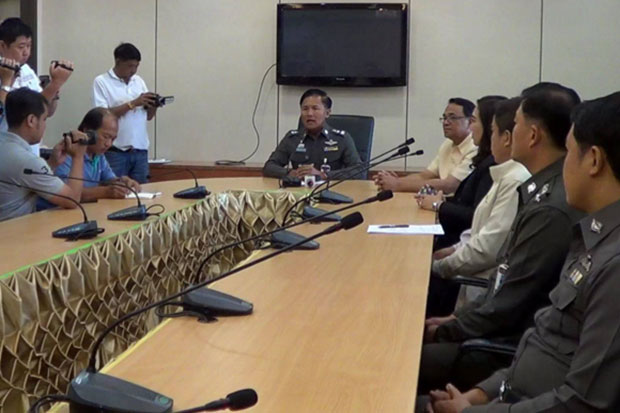 Mr Thanapol, 23, said they were cut off and then rear-ended by an erratically driven Honda near the Topland plaza shopping mall on Ekathosarot Road.

Mr Chaichawat said four shots were then fired from the Honda and the fearful students fled, only to be pursued by the assailing vehicle. The Honda's driver then fired another gunshot, hitting the students' left rear tyre, bringing the car to a stop.

According to Mr Thanapol, the unidentified driver then tried to open the students' car door before threatening to shoot into the vehicle if they didn't' come out.

Once they left the car, the Honda driver allegedly pistol-whipped Mr Chaichawat before handcuffing him, Mr Thanapol claimed. He asserted that Mr Siriwat was then knocked down and kicked in the face before he, himself, was smacked in the eye. Mr Tharathep was hit and kicked when he stopped an assault on the female student, he added.

The student then claimed their attacker called in two friends who arrived on a motorcycle, who scolded them and fired shots into the sky to intimidate them.

The entire incident was video-recorded from a dash camera in a third vehicle, which had pursued the Honda following a collision during the pursuit of the students.

The five students went to Muang police station on Thursday to file their complaint in a case that prompted outrage from fellow students, 50 of whom petitioned Pol Lt Gen Chonnasit Wattanawarangkul, commissioner of Provincial Police Region 6, to investigate the case.

Mr Chaichawat's relative, Chutima Thamrongsakkul, said she had been contacted via social media with an offer of compensation to settle the case. However, the families of the four other students wanted to pursue criminal charges.