2 girls die after being kicked into Bangkok canal by boy

Rescuers try in vain to revive two young Cambodian girls who drowned after being kicked into a Bangkok canal by a classmate on Thursday. (Vajira Hospital Facebook page photo)

Grade-school bullying turned to tragedy in Bangkok when two young Cambodian girls drowned after being kicked off a Suan Luang district pier by a 12-year-old boy.

Piyapat "Nong May" Perdpong, 11, and Supawadee ''Nong Waen''  Varathum, 12, both died around 2.30pm Thursday at the Khlong Prawet Burirom in front of Altiatisom mosque near Soi On Nut 43 and Sukhumvit Road 77.

Phra Khanong police and rescue workers joined local residents in searching for the girls, whose lifeless bodies were pulled from the canal shortly later. Their remains were sent to Chulalongkorn Hospital for forensic examinations.

Parents of the two Sulaomai School fifth graders burst into the tears when they saw the bodies of their loved ones.

Piyapat''s father, security guard Piyapawat Perdpong, 45, said his daughter, her two younger brothers and the other victim were playing at the pier near their school when a male classmate arrived on a bicycle, walked towards the girls and kicked Piyapat into the canal.

Supawadee tried to help Piyawat, but the boy kicked her into the water too, said Mr Piyasawat, quoting his 9-year-old son as saying.

Neither girl could swim. 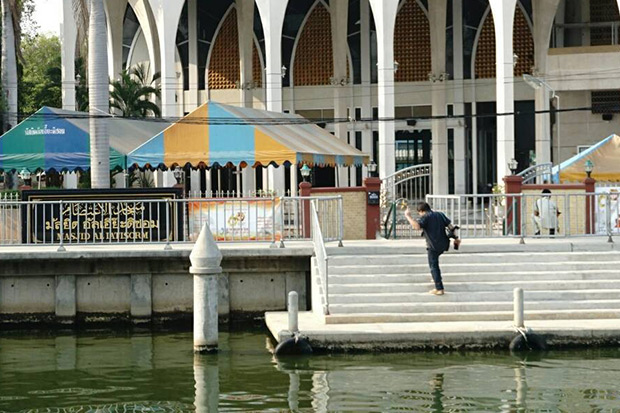 The two girls managed to grab the bank of the khlong, but the boy stomped on their fingers, causing them to slip under the surface. His youngest son cried when seeing his sisters fight for life and residents came running to help, but too late.

"My daughter could not swim. I asked the boy why he kicked his friends, he said he was just teasing and did not foresee the consequences,'' said the tearful father, who cared for three children after separating from his wife two years ago.

Pol Col Nipon Charoensil, superintendent of Phra Khaong police, said investigators would call the boy and his parents in for questioning in the presence of social workers.