A 36-year-old bodybuilder accused of kicking a female student and stubbing a lit cigarette on her face has been arrested in Chiang Rai after his new potential target alerted police.

Thanamet Khochornna was caught at Chiang Rai airport on Thursday and later taken to Bangkok’s Hua Mak police station for a media briefing.

The man has been charged with attempted murder, physical assault causing serious harm and illegal detention.

The arrest follows a complaint made to the Pavena Foundation for Children and Women by the mother of a female law student that her daughter had been brutally assaulted by her boyfriend, Thanamet.

The man, who was earlier reported by Thai media to be a former member of the Thai national bodybuilding team, allegedly viciously kicked the young woman, causing lung injuries and broken ribs.

Mr Thanamet then allegedly burned her face with a lit cigarette and held her prisoner for two days.

The woman said her daughter managed to escape when the man left the house. The student then contacted a friend, who took her to hospital.

Pavena Hongsakula, chairwoman of the foundation, contacted Pol Col Sarayut Chunnawat, chief of Hua Mak police, and officers went to interview the young woman at the hospital. A court warrant was then obtained for Mr Thanamet's arrest.

During police interrogation, Mr Thanamet said he was a professional bodybuilder, not a former national team athlete as reported.

The suspect said he assaulted the university student in a fit of jealousy after learning that a foreign man had flirted with her.

He insisted he had not forcibly raped her, claiming sex was consensual. He claimed they lived together for 3-4 months, he claimed. He also denied fleeing arrest, claiming he just wanted to find the money to fight the case.

The suspect apologised to the victim’s parents for his action.

Police searched his room and found a machete he allegedly used to threaten the female student. Police said they would extend their investigation as they suspected he had made similar attacks on other women.

Before the arrest, a young Chiang Rai woman contacted the Pavena foundation and said she had been keeping in touch with a bodybuilder for about one year via online chat.

The man recently told her he wanted to visit Chiang Rai and asked her to find him accommodation. She became suspicious as her online bodybuilder boyfriend looked a lot like the man in news stories wanted for assaulting a university student.

The foundation then passed the information to Hua Mak police, said Pol Col Sarayut. Chiang Rai police then cooperated in making the arrest at the airport. 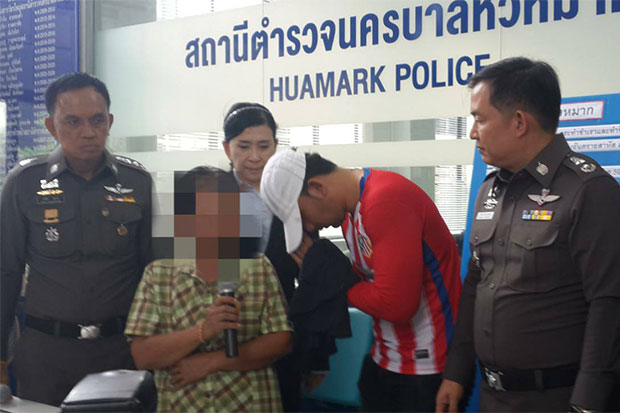 Bodybuilder Thanamet Khochornna, 36, apologises to the mother of the young woman he admitted viciously assaulting at a media briefing at Hua Mak police station on Thursday. (Photo taken from Pavena Foundation for Children and Women Facebook page)