more than half non-irrigated land said to be affected

More than half of the country outside of irrigation zones is close to a drought crisis, according to the Royal Irrigation Department. 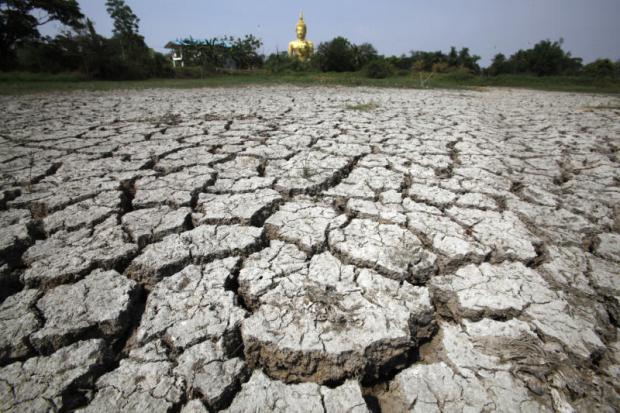 The crisis is looming large for non-irrigated areas in 152 districts of 42 provinces, Thongplew Kongchan, the department's deputy chief, conceded.

Areas outside the irrigation zones rely principally on water from natural sources, many of which are fast receding.

Speaking at a seminar on the drought organised by the Isra News Institute on Saturday, he said drought was also threatening energy security.

The Ubolratana Dam in Khon Kaen is running so low on water that it could mar its ability to generate electricity for provinces in the Northeast.

Mr Thongplew explained that if the dam continues to discharge more water, it might have to lower its power production.

However, the RID deputy chief said the government has prioritised the use of water, which is supplied first to farmlands that grow crops from the previous season.

Farmers have been asked to suspend rice planting if their land is not served by irrigated water and encouraged to switch to drought-resistant crops.

Some rice farms can survive better than others because they have underground water sources available, he said.

Mr Thongplew said the management of water for farmland had so far not encountered any major problems. There is no need to delay the first rice growing season, due to start next month, he said. He gave assurances that there is enough water for irrigation until July, which marks the onset of the rainy season.

There are 33 large-scale reservoirs and dams nationwide, and 448 medium-sized reservoirs, each capable of holding less than 100 million cubic metres of water. The rest are small-scale reservoirs mostly supervised by local administration organisations.

In the Chao Phraya river basin, with four large dams covering 22 provinces, water in the dams this year is at about 12%, or two billion cubic metres less than last year.

Rawee Rungrueng, president of the Thai Farmers Network, said the government's policy on crop substitution during the drought has been problematic in practice because it was rushed and lacked the input of farmers.

He said the policy should have been planned and executed well in advance.

Jakkarat Lertopas, deputy governor of the Industrial Estate Authority of Thailand, said the use of water by industrial estates would not cause any disruption to supplies.

The estates were now recycling their water and exploring underground sources.

Niphon Puapongsakorn, of the Thailand Development Research Institute, urged the government to map out a long-term management plan rather than try to tackle problems every year.

HONG KONG: Hong Kong activist Joshua Wong will plead guilty in the city’s biggest national security case, local media reported, after being detained for more than a year without a trial date under the China-drafted law.

The government’s Centre for Covid-19 Situation Administration on Friday will consider the new status of Covid-19 as an endemic and communicable disease under surveillance.