NAKHON SI THAMMARAT - An ancient Hindu phallic symbol believed to be more than 1,000 years old has been found at a local temple in Tha Sala district. 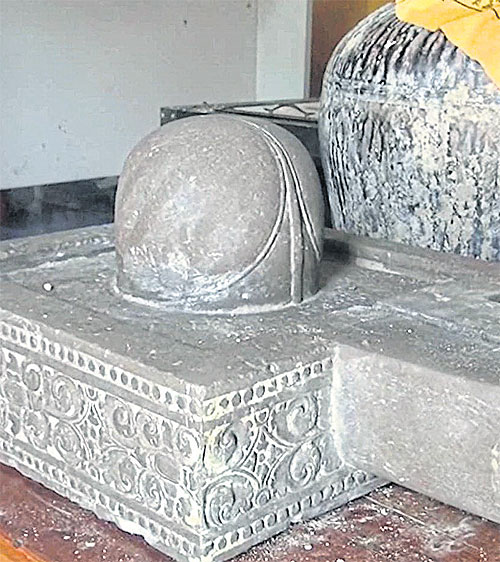 A ‘shiva linga’ with flowers carved in relief on its base was discovered at Wat Nang Tra in Tha Sala district of Nakhon Si Thammarat on Wednesday. Nutjaree Rakrun

Anat Bamrungwong, director of 14th Regional Office of the Fine Arts Department in Nakhon Sithammarat, said Thursday the shiva linga or Hindu phallic symbol is believed to be about 1,300-1,400 years old.

He was speaking as he was inspecting the stone sculpture and other artefacts found at Wat Nang Tra in Tha Sala district.

The shiva linga has a base which is about 47cm wide and 1 metre long. Its base has flowers carved in relief which in the Tawaravadee style, Mr Anat said.

The sculpture was in good condition with beautiful flowers on it, he added.

"It is a treasure trove of the South," he said.

Phra Kru Supakittayaporn, the abbot of Wat Nang Tra, said he hired a contractor to improve landscaping in the temple's compound in preparation for construction of a religious tower.

In the process, workers used a backhoe to dig down about three metres and found the symbol, an ancient jar and 20 Buddha coins on Wednesday.

Phra Kru Supakittayaporn said he was alerted of the discoveries by a foreman overseeing the work.

The abbot said he had inspected the discoveries in the field and brought them to his quarters for safekeeping.

He contacted the 14th Regional Office of Fine Arts Department in the province to alert them of the discoveries and asked the department to examine the findings at the temple.

A group of believers reportedly flocked to the temple to observe and worship the ancient symbol.

The phallus has been regarded as a symbol of power and fertility by many cultures around the world, including Hindus who worship it.

One of the world’s most celebrated jazz and classical pianists, Keith Jarrett, has revealed that he probably won’t perform publicly again after a series of strokes.