Road accidents during Songkran have claimed 442 lives over seven days, 78 more than last year, with drink driving being the number one cause of crashes.

There were a total of 3,447 road accidents during the so-called "seven dangerous days" of Songkran, which ended on Sunday, Interior Minister Anupong Paojinda, chairman of the Road Safety Directing Centre, said Monday. A total of 3,656 people were injured.

On the last day alone, there were 343 accidents which killed 45 and injured 385 people. 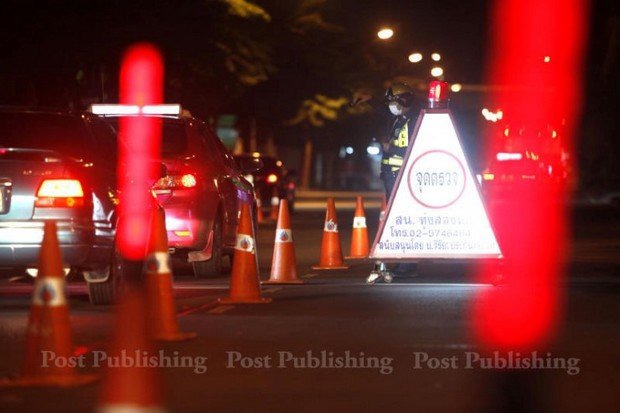 All the checkpoints, police overtime, military help, thousands of vehicle seizures came to failure in the 'Seven Dangerous Days' of Songkran, which had the bloodiest holiday toll since the safety campaigns began. (Post Today photo)

Drink driving was the single biggest cause of road accidents accounting for 34%, followed by speeding which was reponsible for 33% of accidents. Most of the crashes -- about 81% -- involved motorcycles while pickup trucks took second place at just under 9%.

According to last year's data for the seven-day period, a total of 3,373 road accidents were reported with 364 deaths and 3,559 injuries. Drink driving topped the causes of road accidents last year also.

Gen Anupong said, due to the increased number of fatalities and road accidents this year, officers in each province have been ordered to study the statistics and forward their recommendations to the Road Safety Directing Centre to formulate methods of dealing with the problem.

The assessment will be wrapped up within five months, the minister said.

Stricter laws to ensure road safety will then be adopted, including the process of issuing driver's licences, while other measures to boost road safety awareness among motorists will be laid out.

Another study will be carried out to determine whether the blood-alcohol limit should be brought down from the current 50mg per 100ml to 20mg, in line with international standards.

The measure, introduced by the National Council for Peace and Order (NCPO), was temporarily imposed during the New Year and Songkran holidays.

Gen Prawit said he would consult the transport minister and cabinet members about the move.

The campaign was implemented by the NCPO's peace-keeping force, police and administration officers to ensure road safety over the Songkran holidays.

She said the NCPO has been asked to continue this campaign throughout the year in a bid to reduce fatal road accidents which result from drink driving.

She added the campaign can also yield indirect benefits since the checkpoints could help stop a lot of crime, including trafficking of drugs, weapons, untaxed goods and illegal migrant workers.