The front section of this pickup truck was torn off when it was hit by a train at a railway crossing where automatic barriers are in the process of being installed in Surin's Muang district on Tuesday morning. The driver was seriously injured.(Photo by Nopparat Kingkaew)

SURIN -- The driver of a pickup truck was seriously injured when his vehicle was hit by a train at a railway crossing in Muang district on Tuesday morning.

The accident occurred about 9.30am. The pickup, loaded with chickens, was crossing the railway track at at Ban Khok Mian, where automatic barriers are being installed. It was hit by train No.421 from Nakhon Ratchasima en route to Ubon Ratchathani.

Chaoowit Karaket, 35, the pickup driver, was thrown out of his vehicle by the impact. He was admitted to Surin Hospital with serious injuries.

The front section of the pickup was sheared off by the impact. At least 50 chickens were killed, police said.

The train continued on to Ubon Ratchathani after parts of the mangled pickup truck had been removed from the front of the locomotive. 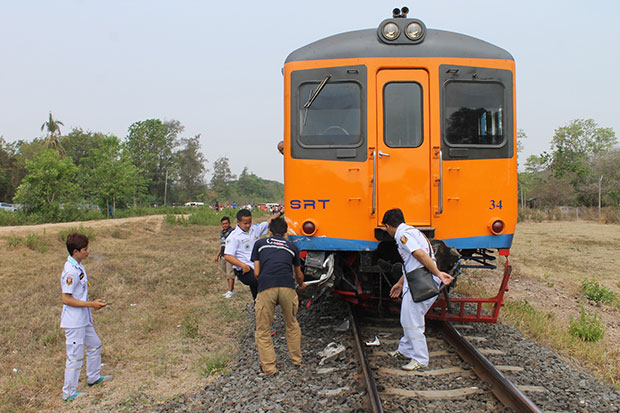 Rescue workers remove wreckage from the mangled pickup truck from the front of the train after the crash at a railway crossing in Surin on Tuesday morning. (Photo by Nopparat Kingkaew)