The Esperanza departs from the port of Diego Suarez on April 15 entering the Indian Ocean on a new campaign targeting users of 'destructive' fish aggregating gear used by boats supplying tuna canner Thai Union. (Photo by Will Rose/Greenpeace)

Greenpeace stated on Wednesday that its largest and fastest vessel, The Esperanza, had begun the first operation of its kind, an expedition in the Indian Ocean to find and remove destructive fishing gear, including fish aggregating devices (FADs), belonging to boats supplying Thai Union.

"We've seen these marine snares, or fish aggregating devices, up close and even though they are meant to attract tuna they are teeming with other marine life, which gets caught in industrial nets and there it dies and is thrown back into the water as so-called bycatch," said Francois Chartier, oceans campaigner at Greenpeace France.

"This is unsustainable and unacceptable and we are intent on dismantling every single one we can find."

He said that Thai Union supplied one-fifth of the world's canned tuna and owned major brands around the world.

"If Thai Union doesn't want to stop this dirty tuna coming onto our shelves, then we as a movement are going to do it for them, by taking action from sea to shelf," Mr Chartier said. 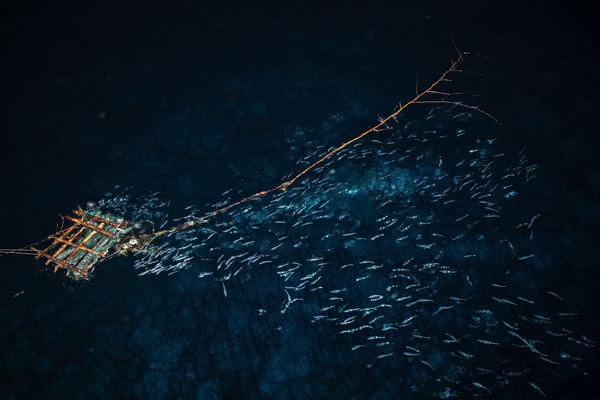 A FAD (fish aggregating device) in use at night. Greenpeace is in the Indian Ocean to document and peacefully oppose destructive fishing practices. (Photo by Will Rose/Greenpeace)