PATTAYA — Eight Chinese tourists were injured on Tuesday after their speedboat collided with another vessel between Koh Larn and the mainland.

The head-on crash occurred as the NPE speedboat with 16 tourists from China was leaving Ta Waen beach on the resort island for Pattaya, Pol Col Sukthat Pumpunmuang, the Pattaya police chief, said.

High waves obscured visibility for the driver who could not see the Blue Dragon 8 speedboat, which was on its way from Pattaya to the island with an unknown number of Chinese tourists.

The collision sank the NPE and all passengers on the two boats were rescued. Eight passengers sustained minor injuries, the officer said.

Police were looking for the drivers of the two boats for questioning.

The location of the accident close to where a jet ski was hit by a speedboat on Monday, killing a Chinese visitor. 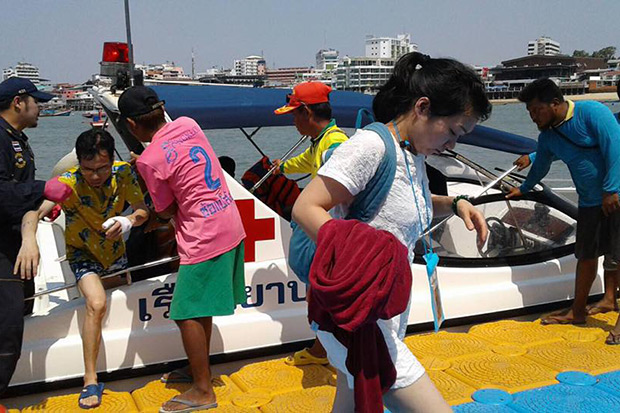 Chinese tourists are helped from a rescue boat in Pattaya following the speedboat crash. (Photo from ข่าวพัทยา Facebook page)