Yingluck tells Prayut to ease up on critics
Thailand
Politics

Yingluck tells Prayut to ease up on critics

Protesters attach stick-it messages to themselves to protest the military regime's ban on most political speech. Police quickly ended demonstration but both ex-premier Yingluck and Gen Prayut's Reform Assembly spokesman called for an end to the speech prohibition. (Photo by Wichan Charoenkiatpakul)

Commenting on her Facebook page, Ms Yingluck said that, as a former prime minister, she understood how Gen Prayut must feel when facing criticism.

Gen Prayut is a public figure who has to be open-minded about both positive and negative opinions, she said.

"I used to face such situations. I was always patient. I understand what you [Gen Prayut] feel, but [at that time] I was unable to impose laws or orders as you have done," said Ms Yingluck.

She said Gen Prayut used to tell her that enforcing laws to dismiss people who fail to comply with policies or force anyone to work for the administration would worsen the political conflict.

"I have always said that political divisions do not stem from people who have different opinions. It would be good for them to share ideas and opinions for the country's development," she added.

Her comments came after eight people were arrested in connection with online comments criticising the military regime and Gen Prayut, including the "We Love Gen Prayut" Facebook page, last week. 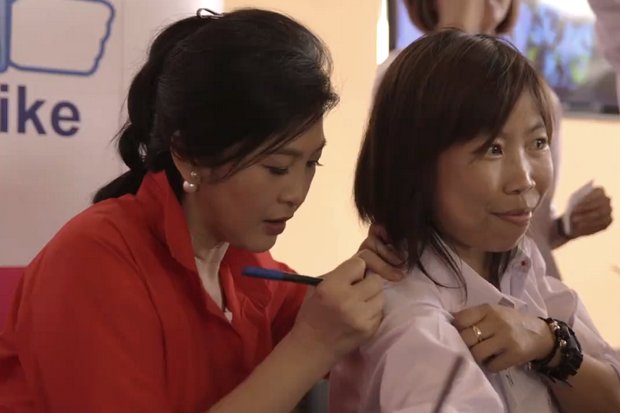 Ex-premier Yingluck Shinawatra, signing the shirt of a woman admirer, has been on a tour promoting her Facebook page, which has passed 5.2 million likes. On Sunday, she urged her successor, Prime Minister Prayut Chan-o-cha, to stop enforcing harsh laws aimed at anyone expressing political opinions. (Screen grab from Facebook/Y.Shinawatra)

Meanwhile, Sirawith "Ja New" Seritiwat, of the anti-coup New Democracy Movement, was taken away once again  by police Sunday afternoon near Chong Nonsi BTS station, after leading a rally to call for the release of the eight detainees.

More than 30 people attended the rally which involved writing notes and sticking them on their bodies to express their opinions.

Meanwhile, the National Reform Steering Assembly (NRSA) has warned the regime to be cautious about applying a harsh approach to opponents ahead of the referendum.

NRSA spokesman Wanchai Sonsiri said some groups of people were trying to incite chaos, particularly those opposing the National Council for Peace and Order (NCPO).

"They are stepping up their movements against the administration which is arresting its opponents," he said.

The regime must be aware of their "games" and not fall into a trap, he said, adding the government must be open to discussions to solve these conflicts.

Harsh approaches don't always work and the regime should be more cautious, he said, adding that issues involving the referendum require freedom of expression.

People should be allowed to express their opinions in line with the law, but are barred from telling others to vote in the referendum, he said. The regime's tactic of arresting opponents could backfire, Mr Wanchai said.

The Election Commission (EC) must work in unity to plan the referendum. and its work should create public confidence about the poll, he added.

Seri Suwanphanon, chairman of the NRSA's political reform committee, said the EC's recent announcement on regulations regarding the expression of opinions under the referendum law has caused confusion.

NRSA member Sompong Srakawee said the EC's regulations do not correspond with democratic principles and fail to create a democratic atmosphere for the referendum. Its regulations are unclear and authorities could end up basing judgments on personal opinions, he added.