People sit and eat on a sidewalk along a street in Bangkok's Chinatown, one of few city districts yet to be devoured by malls and high-rise condos. But change is coming and fast. A new underground train is now ploughing straight into the heart of the historic quarter. (AFP photo)

For nearly a century Thanuan Amnueilap has watched history sweep through the bustling maze of alleyways that make up Bangkok's Chinatown, one of the city's few districts yet to be devoured by malls and high-rise condos.

But change is coming -- and fast.

The Blue Line extension of the MRT subway soon will plough straight into the heart of the historic quarter, and in the process transform a chaotic, but charming, area into a property goldmine.

"We can't do anything," the 92-year-old said from a noodle stall tucked inside a lane of shophouses.

His neighbourhood, known as Charoen Chai, lies near the proposed new subway station, which is set to open in 2018 and will link the riverside district to Bangkok's glitzy downtown.

Around 60 families have lived there for generations selling joss paper and other wares, but now they fear eviction as the developers -- and their influential Bangkok backers -- close in.

Scores of homes across the street have already been knocked down to clear a path for the Blue Line, and land prices have soared more than 20% over the past five years.

The cards are stacked against Mr Thanuan and his neighbours, whose land is owned by a charity run by Bangkok's governor.

"If they want us to leave, we have to leave," Mr Thanuan said before sidling back to his modest home, where a sign still bears the name of the clinic his father ran before hospitals were widespread. 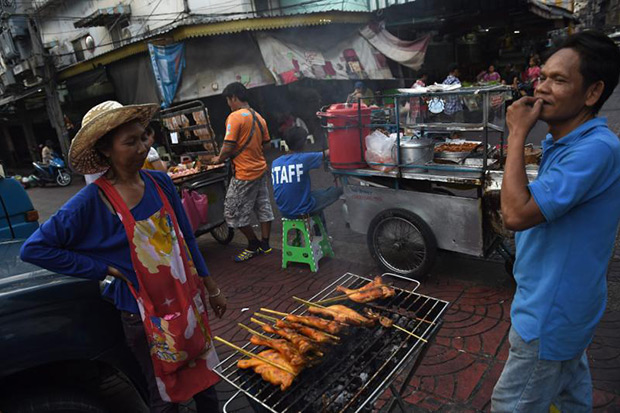 The governor's charity would not comment on its plans for the area. But it has stopped offering long-term leases in favour of monthly ones since the subway plans were set.

That has left the community in constant fear of eviction, a fate that has befallen tenants across the district.

Chinatown emerged in the 18th century, when throngs of traders transformed the area into a commercial hub.

It is one of the world's oldest and largest Chinese diasporas, with many tracing their ancestry to boat migrants who fled famines in southern China and arrived with meagre savings, often sleeping dozens to a room.

Bangkok's financial sector has since shifted east, but its business elite is dominated by tycoons who grew up on Chinatown's streets, some of the country's most-striking rags-to-riches stories.

Yet some of those same figures are now behind the conglomerates gobbling up swaths of Chinatown's desirable riverside land.

TCC Land, a company run by Chinatown-bred Charoen Sirivadhanabhakdi, one of the country's richest magnates and owner of the Chang beer empire, has already bought up a clutch of shops famous for selling auto parts and musical instruments down the road from Charoen Chai.

Plans for that area, known as Woeng Nakhon Kasem, are still under discussion. But fear abounds that the company will build a mall similar to the one it erected down the river.

Unable to outbid Bangkok's billionaire developers, Charoen Chai residents have instead focused on making the case for their neighbourhood's historic value.

Sirinee Urunanont, 45, took the lead and turned a shophouse down the street from hers into a museum showcasing the simple, dimly lit abode where a Chinese opera troupe used to live.

"We need to show people why we want to keep this area," she told AFP. 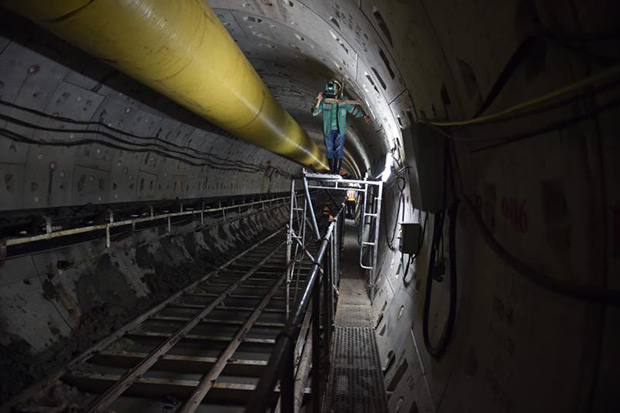 A worker checks alignments in a tunnel under construction along the current extension of the Metropolitan Rapid Transit subway Blue Line into Bangkok's historic district of Chinatown. (AFP photo)

"The conservation system in Thailand is more about preserving temples, not common property like shophouses or markets," he said from an office stacked with colour-coded maps marking the neighbourhood's treasures.

While the government only lists 26 Chinatown buildings as heritage sites, Mr Yongtanit and his group of preservationists say there are nearly 7,000 that need protection, including those in Chaoren Chai.

The biggest challenge, he says, is getting city planners to listen to local residents rather than the developers.

"It's very hard to get voices from the community to reach those people," the professor explained.

Despite grassroots resistance, communities across Bangkok are facing extinction as authorities escalate a campaign to sanitise streets known for their character. Much-loved outdoor markets have been dismantled overnight, drawing condemnation from locals and visitors alike.

The head of Bangkok's city planning council dismisses these sweep-ups as minor. Instead he points to his ambitious plan for Chinatown, laid out in elaborate presentation posters and cardboard models featuring leafy parks and tidy waterfronts.

But Ms Sirinee and others bracing for eviction say their voices are not being heard.

"I want people to know that we have sent a letter to many organisations," she said, listing off various government bodies she's petitioned to help save the community. "But after that nothing happened. So many times like this, but never any action."