Several high-voltage power poles are knocked down by a seasonal thunderstorm that battered two districts of Phitsanulok province on Wednesday evening. Many houses were damaged. (Photo by Chinnawat Singha)

Three people, including a six-year-old girl, were killed by a lightning strike as seasonal thunderstorms lashed five provinces in the North and the Northeast on Wednesday, damaging numerous houses and toppling more than 20 power poles.

Several areas in Phanom Phrai district of the northeastern province were hit by a storm that uprooted several power poles and big trees and ripped away roofs of 52 houses.

In Nakhon Ratchasima, a storm lashed Phimai district on Wednesday evening, ripping away roofs of a school and numerous houses.

A concrete structure at the entrance of the Samrit housing estate collapsed amid strong winds, blocking traffic for two kilometres. 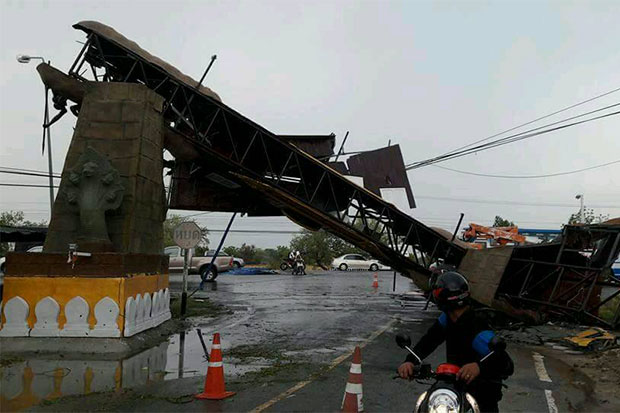 A concrete structure at the entrance of a housing estate in Nakhon Ratchasima collapsed during a summer storm on Wednesday evening. (Photo by Prasit Tangprasert)

In Phitsanulok, a summer storm damaged more than 100 homes, two temples and a pair of rice mills while also knocking down more than 20 high-voltage poles in two districts of this northern province on Wednesday evening.

The damage was reported in Bang Rakam and Muang districts. No injuries or deaths were reported.

Wattana Japrem, whose Premsiri Rice in Bang Rakam district was damaged said on Thursday that a fierce storm tore away roofs of his mill on Wednesday evening. The structure later collapsed. His office and his house located in the same compound also were damaged.

Jampa Phetkaew, 60, owner of Sor Thanawat rice mill in Bang Rakam district, said the storm was fiercer than previous years. It caused damage worth about 5 million baht to her mill.

Roofs of two buildings at Wat Khlong Banrai School and many houses in the same district also were blown away by the storm. 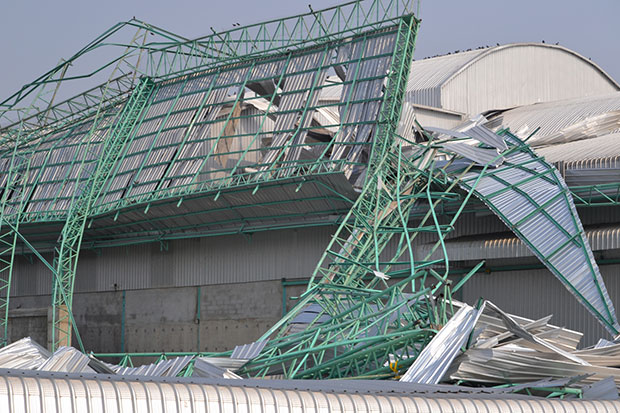 A rice mill in Phitsanulok's Bang Rakam district is damaged when a storm lashed this district on Wednesday evening. (Photo by Chinnawat Singha)

Soldiers sent to survey damage in the two districts on Thursday reported that 78 houses were damaged.

Bunlert Sirisa, chief of the provincial disaster prevention and mitigation office, said a total of 69 houses in the three districts were damaged. A storm also caused a village tap water-production tank to collapse and uprooted three power poles, he added.

In Lampang, more than 300 houses in five districts were damaged by storms, hail and gusty winds that struck the areas from Wednesday evening until night. 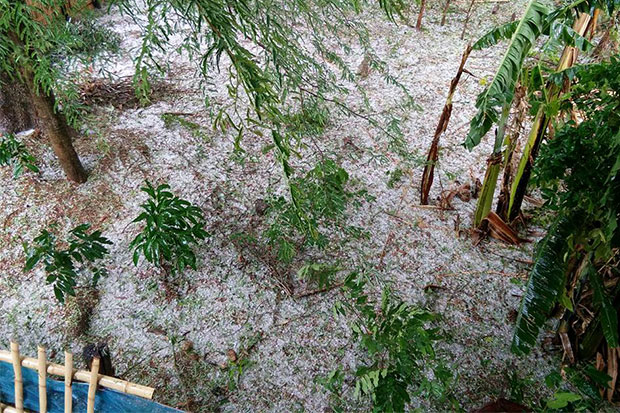 There were reports that more than 300 houses in Wang Nua, Muang Pan, Mae Mo, Hang Chat, Thoen districts were damaged. Tambon Wangsai in Wang Nua was the worst hit area.

The Meteorological Department on Thursday warned people in the North, Northeast, East and the Central Plains to brace themselves for thundershowers and gusty winds between May 8-11 as a southeast wind brings humidity from the South China Sea and the Gulf of Thailand to the upper part of the country.

People living in those areas were told to keep off unsecured buildings during this period.