Photos and video posted to social media allegedly show US fugitives Ether (in the photo) and Utah spray-painting an out-of-service MRT train, possibly early on April 22. (Photo via FB/The Grifters)

Australian authorities have captured and jailed the US fugitive who claims to have spray-painted an MRT train during a cross-Asia graffiti campaign.

The Australian Associated Press reported the male half of the "Ether and Utah" spray painters is in custody in the Melbourne suburb of Fitzroy.

Jim Clay "Ether" Harper, 31, of New York, was arrested in Fitzroy and brought before the Melbourne Magistrates Court last Thursday, according to the AAP.

Harper and his girlfriend Danielle Bremner, 34, of Chicago, fancy themselves as the "Bonnie and Clyde" of the graffiti world, according to their websites.

The pair, who have a phenomenal network of self-aggrandising social media - Facebook, Instagram, two separate blogs, Tumblr, two websites and more - claim they have been on a cross-Asia trip, vandalising key transportation systems with spray paint as they go.

Late last month, possibly early on April 22, they spray-painted a car of the MTA while it was out of service. They photographed and made a video of the "mission", claiming that the MRT was a sort of holy grail for spray painters.

"[T]he beautiful red, purple and yellow striped trains of the underground MRT have been a goal for metro writers worldwide," said the text entry on the Facebook page where they posted the video.

"Infamous for the snake-infested jungle surrounding it and the Royal Thai Police who diligently guard it, many writers have attempted to paint the RAMA IX Metro Depot, but very few have succeeded."

The over-the-top scene-setting then introduces the video.

Extreme graffiti vandalism is considered by a few to be street or performance art.

One of their websites, "Utah & Ether", says the couple are "mixed media artists" from New York and Chicago who "have garnered global recognition for their vandalism and art".

The website said their "works" could be viewed in cities including Buenos Aires, Paris, Milan, New York, Beijing and Tokyo. 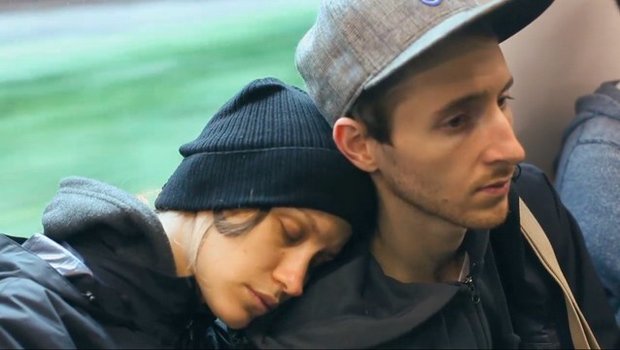 Jim Clay Harper, 31, of New York, aka Ether, and his girlfriend Danielle Bremner, 34, of Chicago, known as Utah, were photographed for a documentary so far unreleased by Finnish filmmaker Sauli Sirvio. The US duo flatter themselves as the 'Bonnie and Clyde of the graffiti world'. (Photo via sicspace.net)

Harper and Bremner were convicted of vandalism in the US about eight years ago. They broke probation and claim to have "left our homeland for good" in 2011, flying to India and beginning a graffiti spree that has been confirmed in South America, Europe, Asia and Australia.

The spray-painting of the MRT train was the first reported action of the duo in Thailand, but they clearly were familiar with the city. They said they operated with another US couple who support graffiti "artists".

According to the AAP, Victoria state police say Harper caused almost A$2,500 (64,500 baht) worth of damage when he allegedly defaced trains at Bayswater, Williamstown, Kensington and Pakenham.

He also was accused of trying to steal a phone from someone, who he allegedly punched, and with possessing a controlled weapon.

In all, he faces eight charges. Harper did not apply for bail when he was charged last Thursday. He was remanded in custody, and is to reappear in court this week.