A fire crew on Monday ensures the flames are truly out in a section of Doi Suthep-Pui National Park ravaged by an overnight forest fire in Chiang Mai province.(Photo by Cheewin Sattha)

Some earlier media reports had suggested the burned over area was far larger.

Mr Pongpawat said about 80 people from fire fighting units of the Forestry Department and staff of Doi Suthep-Pui and other national parks in the province were called in to combat the fire, which began  on Sunday afternoon.

They were deployed to four points  and were able to contain the flames by about 1am on Monday, but the fire was still burning in places. Fire breaks were then built around burning stumps and at vulnerable spots where the flames could spread again. This work was continuing.

Fire crews and rangers would remain in the area and keep it under close watch until the rain comes. The blaze had destroyed about 290 rai of forest, said Mr Pongpawat.

Helicopters operated by the Ministry of Natural Resources and Environment and the Ministry of Agriculture had flown over the national park to examine the damage. Water would be dropped on spots where the fire was still burning.

Mr Pongpawat said local people needed to be more aware of the damage to the provincial economy, tourism and natural resources caused by fires which might be started out of carelessness and  traditional slash-and-burn farming.

Chiang Mai governor Pawin Chamniprasasana on Monday ordered three helicopters -- two of the Department of Royal Rainmaking and Agricultural Aviation and one of the Ministry of Natural Resources and Environment -- to dump water on places where fires were still burning, especially burning trees on steep cliffs not accessible by fire fighters on the ground.

Nuengruthai Tantiplubthong, director of the Chiang Mai-based Northern Rainmaking Operation Centre, said the Department of Royal Rainmaking and Agricultural Aviation had been reinforced by another helicopter from Nakhon Sawan for the ongoing fire fighting operation. 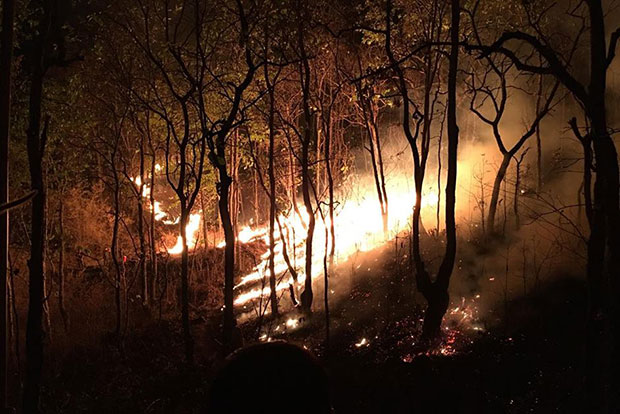