Wat Dhammakaya and the charismatic Phra Dhammajayo sprang into the limelight in the late 1990s as a reform sect, and almost immediately became mired in controversy and scandal. (Bangkok Post file photo)

The Department of Special Investigation (DSI) has given embattled abbot Phra Dhammajayo seven days to turn himself in to investigators after the Criminal Court approved an arrest warrant for him Tuesday.

Phra Dhammajayo, the abbot of Wat Phra Dhammakaya, is accused of involvement in laundering money and receiving stolen property worth 1.2 billion baht in connection with the Klongchan Credit Union Cooperative (KCUC) embezzlement case.

The decision came just four hours after the DSI assigned its chief investigator in the case, Pol Lt Col Pakorn Sucheevakul, to seek a warrant for the controversial monk's arrest.

The request was opposed by Samphan Sermcheep, the lawyer for Wat Phra Dhammakaya.

DSI chief Paisit Wongmuang said the DSI did not want a confrontation with the temple supporters and the abbot's disciples so it decided to issue a letter to the abbot with a seven-day deadline to meet investigators. He declined to say what the DSI will do if the abbot fails to show up.

Pol Col Paisit said the decision to seek the fresh warrant was made at Tuesday's joint meeting between DSI investigators and prosecutors after the monk sent a lawyer to ask for a delay in Phra Dhammajayo reporting to the DSI.

He said the DSI had reviewed the abbot's medical records and found them inadequate to justify another postponement of the meeting.

Pol Col Paisit said the medical records were issued by Sahavej Clinic, a facility inside the Phra Dhammakaya temple, while the letter authorising Mr Samphan to act on his behalf was not signed properly.

He said the DSI submitted documents from both sides to the court for consideration.

The 72-year-old abbot of Wat Phra Dhammakaya was summoned to hear the charges, which follow the DSI's probe into the 12-billion-baht KCUC case, at the DSI offices. However, he had postponed previous meetings with DSI investigators on April 8 and 25, citing severe ailments.

The DSI sought an arrest warrant on April 26 but the court rejected the request on the ground that the abbot was not a flight risk. The DSI was forced to issue another summons for him to meet investigators on Monday.

Mr Samphan on Monday sought the postponement, but was asked by the DSI to submit documents naming his power of attorney and more medical records to prove the monk was ill.

Mr Samphan submitted further documents to the DSI on Tuesday, allegedly showing the abbot was not fit to travel. He asked the investigators to meet the monk at the temple.

The monk had suffered an allergic reaction to medications, he said.

Before the arrest warrant was approved, the DSI chief said the agency would consider when and how the monk would be arrested and it would also ask other law enforcement authorities to assist.

As for a video clip posted on social media showing Phra Dhammajayo outside the temple performing a ceremony and releasing birds on May 4, Pol Col Paisit said he had not seen it and it might be an old clip.

Mr Samphan said he was aware of the arrest warrant and would discuss it with the legal team. 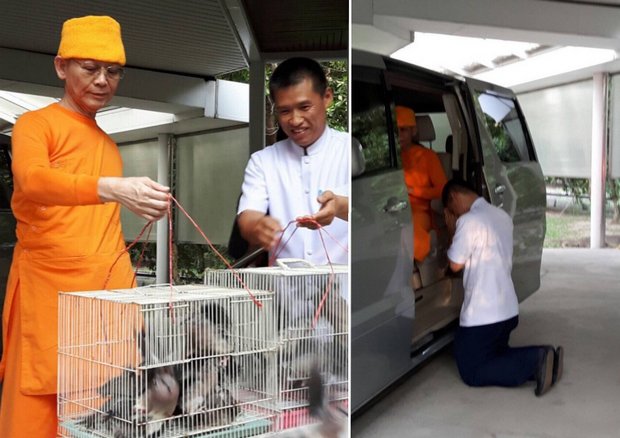 The Wat Dhammakaya legal team admits that Phra Dhammajayo was at a ceremony to free birds on May 3, but claims he was so ill he had to be driven. (Photo courtesy DSI)

According to the monk's lawyer, Phra Dhammajayo suffered a severe allergic reaction to his medications Tuesday morning and felt dizzy.

The monk's team of four doctors advised he should rest for two months.

Mr Samphan declined to comment on the monk's latest symptoms, saying the question should be answered by doctors.

He insisted the illness was not staged to avoid reporting to the DSI.

"The DSI is welcome to bring in doctors to examine Phra Dhammajayo, but they must be specialists in the monk's illness. The doctors who are treating Phra Dhammajayo will decide on this matter," Mr Samphan said before the arrest warrant was approved.

He added the ailment could be life-threatening if the abbot moved around too much.