A dorm building at Pitakkiat Wittaya School in Chiang Rai's Wiang Pa Pao district is left in ruins after it was hit by a raging fire on Sunday night, killing 17 schoolgirls. (Photos by Chinpat Chaimon)

A faulty light tube is believed to have caused a horrific fire that killed at least 17 girls and injured five in a charity school dormitory in the northern province of Chiang Rai.

Nineteen girls, including five injured students and one teacher narrowly escaped by clambering down from the second floor through a window. Two of the injured girls are in critical condition.

The fire broke out about 11pm on Sunday on the first floor. Many of the children who were asleep on the second floor could not escape as the flames devoured the two-storey building.

There were 36 girls and one teacher in the dormitory when the fire started, police said, adding the dead were aged between five and 12.

Pol Maj Gen Sant Sukwaj, commander of the 5th Police Forensic Science Centre, said initial forensic checks found a light tube in the recreation room on the first floor overheated until it melted and dropped onto a pile of clothes below, causing the blaze.

Several children were overcome by smoke and left unconscious as the fire quickly spread to the second storey where they were sleeping before the ceiling collapsed on them, Pol Maj Gen Sant said.

He added that there was a circuit breaker in the building, but the breaker did not respond because the fire was not caused by an electrical short circuit. 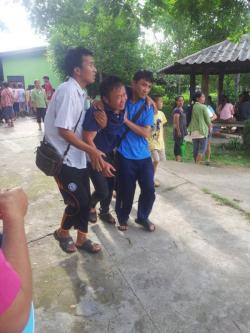 A father breaks down in tears after learning his daughter was among the girls killed in the fire that broke out at the school dormitory in Chiang Rai.

Suchada Kong-arsa, an 11-year-old school girl who survived the tragedy, said she had left her bedroom and gone to a restroom when she saw the blaze raging on the lower floor.

She said she rushed back to wake up her friends and tell them to escape. "Most of them did not believe me and went back to sleep but others did and struggled to escape," she said.

The girl said she, some other friends and a female teacher tied pieces of cloth and blankets together into makeshift rope to climb down the side of the building.

The teacher was the last in line after the girls reached the ground safely, but the rope broke as she clambered down, causing her to fall to the ground and sustain minor injuries, Suchada said.

Another survivor, Suchira Pupae, 15, said she was in a restroom on the first floor when the fire broke out and she rushed to alert her friends.

"Some of them thought I was kidding" she said.

Chokchai Sae Jang, 30, lost two of his daughters in the inferno.

Mr Chokchai said he is a farmer struggling to make ends meet with three children. He sent his daughters to the school two weeks ago and never dreamed it would be the last time he would see them. 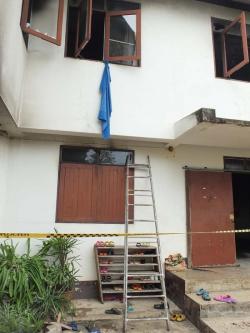 A blanket hanging from a dorm window was used by girls to climb down to escape the inferno.

"I am heartbroken because they were good girls. My eldest daughter was a very good student," he said.

Rewat Wassana, the school's manager, said the school is in the compound of the foundation covering about 20 rai, with a total of 420 schoolchildren studying from kindergarten to primary level.

There is one dormitory for boys and another for girls.

The school caters to pupils from impoverished families as well as those from local hill tribes in Chiang Rai and Chiang Mai, the school's manager said.

Mr Rewat said there are usually 38 students in the female dormitory with about seven or eight girls staying in each room. A dormitory manager, two teachers and a maid also stay in the dormitory. But when the fire broke out, only one teacher, Suchada Sae Mau, 23, was present, he said.

The school's Facebook page has announced the school will be closed until Friday.

Kosit Opsuwan, a Chiang Rai public health official, said that five of the dead have now been identified and their relatives have been contacted to collect the bodies.

DNA samples of the other 12 bodies have been sent to Maharaj Hospital in Chiang Mai for verification. The process is expected to take about two weeks, Mr Kosit said, adding some of the victims died of smoke inhalation.

Of the five injured students, three sustained minor injuries and were being treated at Wiang Pa Pao Hospital in Chiang Rai.

The other two have been admitted to Chiang Rai Prachanukroh Hospital.

One of them, aged five, received burns to 23% of her body and is in the hospital's intensive care unit. Another 9-year-old girl who suffered from smoke inhalation is on a ventilator.

Doctors have now declared the two girls as being out of danger.

Prime Minister Prayut Chan-o-cha yesterday expressed deep regret over the tragedy, saying: "My heart sunk when I saw the news."

Pim Wassana, the school's director, said the school will pay 100,000 baht in compensation to each of the dead student's families. The injured will each receive 20,000 baht to take care of their medical bills.