Prosecutors decided to give the Red Bull heir, Vorayudh "Boss" Yoovidhaya, another chance after he failed to meet them Wednesday to answer charges in connection with a deadly hit-and-run incident in 2012.

Sutthi Kittisupaporn, chief of the Department of Southern Bangkok Criminal Litigation, said the suspect did not appear and the prosecution had heard nothing from his lawyers.

The Office of the Attorney-General had sent a letter to Thong Lor police, who were responsible for the hit-and-run case, advising police to bring the suspect in to meet with prosecutors Wednesday to formally hear the charges and initiate a judicial process. Police followed up by issuing a summons.

Chalerm Yoovidhya, Mr Vorayudh's father, was ranked by Forbes as Thailand's fourth richest person in 2015 with a net worth of more than 340 billion baht. 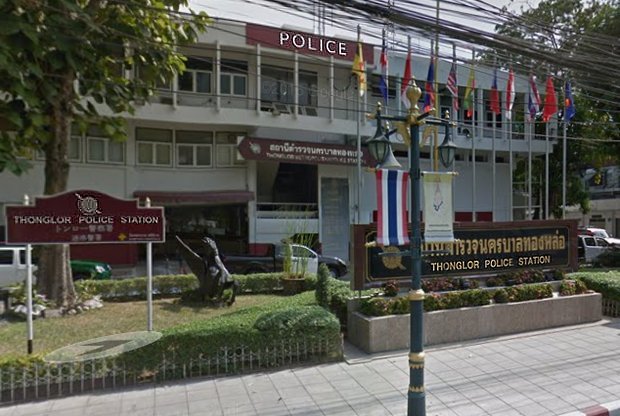 All was quiet here Wednesday, as senior officers and a gaggle of media stood by waiting for the surrender of the heir to the estimated $8 billion Red Bull energy drink fortune. (Photo via Google Maps)

Mr Sutthi said Mr Vorayudh still has a chance to report to prosecutors, noting that they will ask Thong Lor police to explain why the suspect did not show up and to arrange a new meeting.

"If the suspect fails to appear at the next meeting without proper cause he will face arrest," he said, adding that the suspect's lawyers can lodge a petition seeking a postponement, but the request must be based on proper reasons and backed by solid proof.

He said the prosecution expects the next meeting to take place within 30 days. Police will need 15-20 days to issue a new summons and the suspect will be given 10-15 days to prepare, he added. 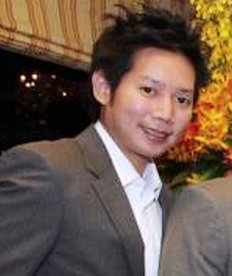 According to Mr Sutthi, if the suspect fails to appear without a proper reason, it will be evident he is stalling the case, which justifies issuing an arrest warrant.

He said that in the criminal process, a suspect must be brought before the court if he is not detained in jail.

A police source familiar with the case said Wednesday that once an arrest warrant is issued, the Immigration Bureau will be notified and asked to make an arrest if the suspect passes through any checkpoints.

"So far there's no need to ask Interpol to track down the suspect because the police can still contact his lawyer. So it's unlikely that he will flee," said the source.

Mr Vorayudh initially faced three charges in connection with the fatal incident, in which Pol Snr Sgt Maj Wichian Klanprasert, a Thong Lor station traffic officer was killed. However, the speeding charge was dropped because the one-year statute of limitations expired.

The suspect faces two other charges — reckless driving causing death and failing to stop his car to help a victim, which have statutes of limitations of 15 years and five years respectively. However, he has reportedly fled the country.

Initially, police investigators agreed to charge Mr Vorayudh with reckless driving causing death and failing to stop his car to help a victim. But the prosecution wanted to also indict him with speeding as video footage from security cameras suggested he might have been driving at up to 170kph when the accident took place. The case was sent back to police to gather more evidence.

The Office of the Attorney-General approved his request, which delayed the indictment by almost six months. The prosecution planned to indict the suspect on Sept 2, 2013, one day after the statute of limitations on the speeding charge expired.

However, Mr Vorayudh failed to appear, and his lawyer, Thanit Buakhiew, claimed his client could not attend because he was in Singapore on a business trip and had come down with the flu. 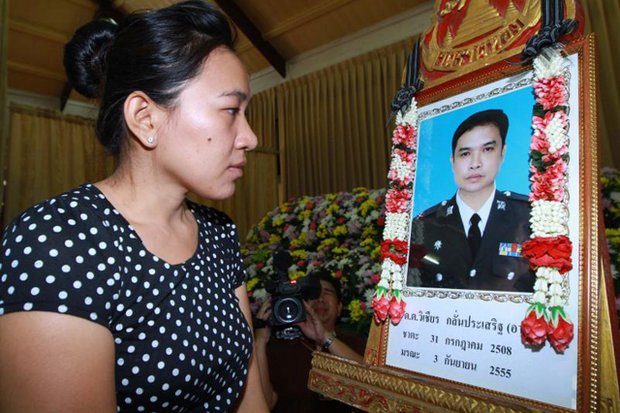 Why he is sought: Nongnoot Saengpraphan mourned the death of her husband, Pol Snr Sgt Maj Wichian Klanprasert, at That Thong temple after he was struck and dragged by a speeding Ferrari on Sept 3, 2012. (Photo by Somchai Poomlard)

Mr Sutthi gave assurances that the prosecution will not allow the suspect to stall the indictment process and wait out the statutes of limitations on the charges. He also said prosecutors are reviewing a request by the victim's family asking if other possible charges can be pressed against the suspect.

According to Mr Sutthi, the victim's family is unlikely to join the prosecution as plaintiffs because they apparently signed a compensation settlement with Mr Vorayudh.

Reporters turned out in droves at Thong Lor police station for signs of Mr Vorayudh. However, it was reported that he did not need to report to police and could instead meet with prosecutors directly.

Flashback: The nation was shocked by the cold-blooded hit-and-run incident in which this Ferrari struck a policeman on his motorcycle, then dragged his body until he was dead. 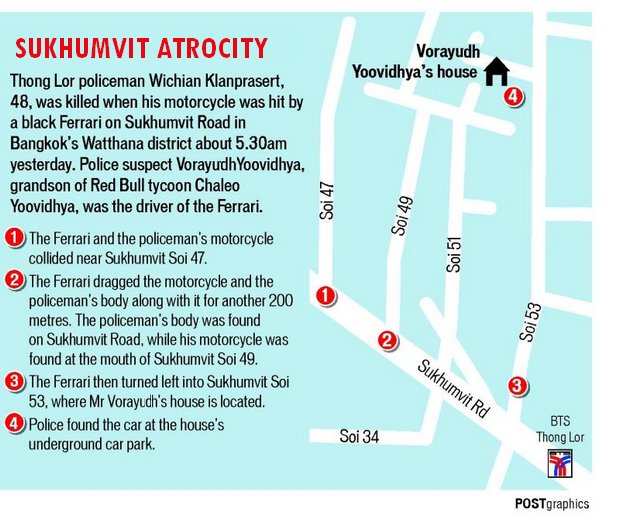 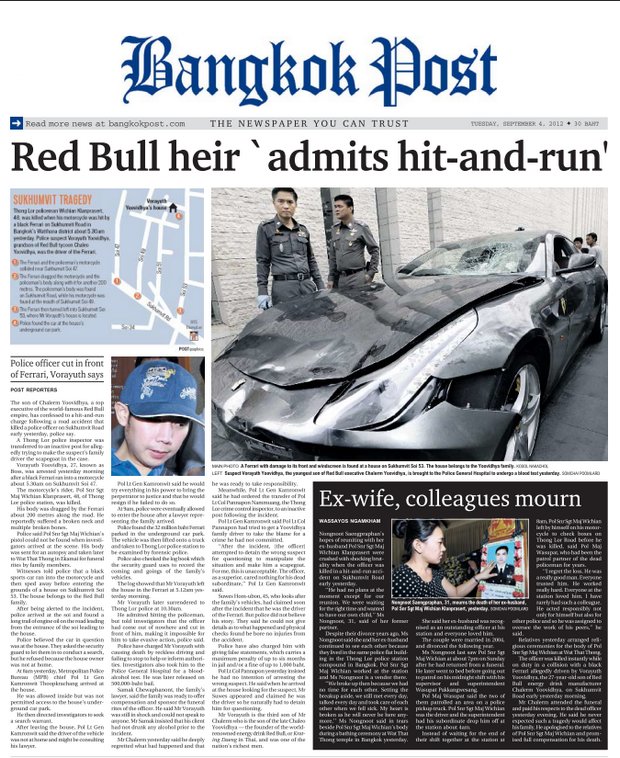