In this photo taken from a video on May 26, rescued tourists rest on the shore after their boat capsized near Koh Samui. (AP photo)

The accident prompted the army to warn that it was ready to step in and enforce speedboat safety standards on the popular southern tourist island.

Maj Gen Kuakul Innajak, deputy chief of the 4th Army, said he would send soldiers to ensure no substandard craft were being used and that operators placed a priority on tourists' safety.

The driver of the boat is being held in police custody and could face charges of reckless endangerment causing death.

Maj Gen Kuakul said the operator could also face legal action if it was confirmed that the boat was substandard and not fit for service but was still being used.

The Aang Thong Discovery 3 left Mu Ko Ang Thong National Park and was heading to Lomphraya pier near Wat Na Phra Lan on Koh Samui when it capsized off Lam Khai (Cape Khai) at about 5pm.

The boat was carrying 32 tourists, a guide and three crewmen. Briton Monica Cozma, 28, and German Franciska Kafo, 29, died at the scene when the boat capsized in wind-whipped seas. The body of a Hong Kong woman, who has yet to be identified, was recovered on Friday.

The boat's occupants were thrown overboard and some were trapped under the vessel when it capsized. At least one person was pulled out after rescuers used hammers to smash a hole in the hull.

Four people remained in hospital on Friday out of the 28 who received medical treatment, said Dr Theerasak Viriyanon. He said one of the four had a fractured shoulder and another had a fractured skull. The other two suffered from a lack of oxygen and are being monitored for lung infections.

Driver Sanan Sitakaew, 47, said the boat was returning from a scuba diving trip off the Ang Thong islands when waves struck the boat, causing it to overturn.

The other passengers thrown into the sea were British, German, Belgian, Chinese, Thai, Romanian and Austrian. Most were quickly rescued by another speedboat passing by while the remaining passengers and crew were picked up later by an official rescue boat. 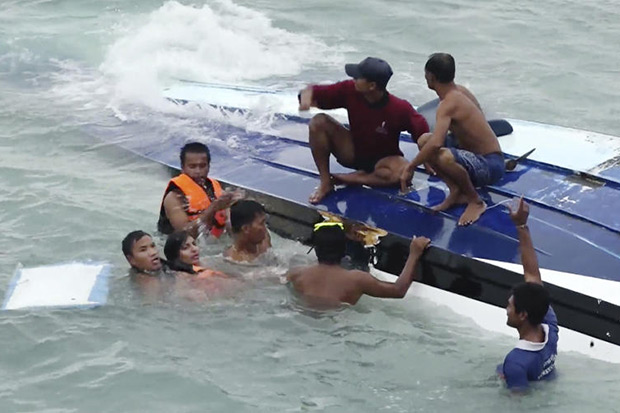 In this May 26 photo taken from video, rescue workers retrieve a woman from a capsized boat on Koh Samui. (AP photo) 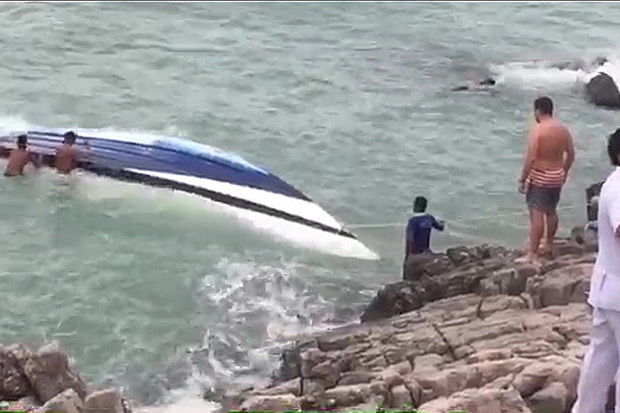 Thanankorn Trabanpruek, chief of the disaster prevention and mitigation office in Surat Thani province, said that teams were still searching for a missing Briton, Jason Robert Parnell. As of late Friday afternoon searchers had found no sign of the man.

Pol Col Akrawas Sithanaboonubon, an inspector from Marine Police 3 said search teams on Friday morning marked off the site of the accident and expanded the search radius by 200 metres at a time.

He said the speedboat had a capacity to accommodate 45 passengers so it was not overloaded. He said bad weather may also have played a role in the accident, as the area is known for heavy winds.

He said the tourists were not wearing life jackets on board and action could be taken against the operator Ang Thong Discovery Co.

Maj Gen Kuakul of the 4th Army said the site of the accident was well-known locally as a danger-prone area because the headland was exposed to winds from three directions.

When the weather was unpromising, operators of small tour boats must suspend their services there and in normal times their passengers must always wear life vests, he added.