Paiboon rules out use of S44 to make arrest

The Department of Special Investigation (DSI) is set to ask the Sangha Supreme Council (SSC) to support its efforts to arrest embattled abbot Phra Dhammajayo.

Justice Minister Paiboon Koomchaya yesterday said he has instructed DSI chief Pol Col Paisit Wongmuang to write to the SSC, the Thai clergy's governing body, to ask if and how it can help the DSI deal with the abbot of Wat Phra Dhammakaya.

The DSI will explain to the SSC problems confronting the monastic community, Gen Paiboon said, adding that he hoped the SSC will not ignore them.

DSI investigators handling the Dhammajayo case yesterday discussed legal steps to be taken against Phra Dhammajayo after he failed to report to acknowledge charges against him by Thursday's deadline. After the meeting, Pol Col Paisit briefed Gen Paiboon.

The DSI investigators are considering seeking court approval for a warrant to search Wat Phra Dhammakaya and arrest the abbot.

Gen Paiboon said it is up to investigators to request a search warrant. Investigators must present the court with specific details of the abbot's residence to obtain the warrant, he added.

However, investigators need to inform the court about the places they wish to locate and search, so they need to have a clear plan before seeking a warrant and entering the temple.

The DSI will also ask police and local authorities to arrest the abbot on sight.

The team will write to explain the legal steps regarding the case to the SSC and other bodies in the monastic hierarchy in compliance with the Sangha Act, Gen Paiboon said.

Authorities will also take legal action against anyone who shelters or hides the abbot or helps him escape arrest under Section 189 of the Criminal Code, Gen Paiboon said.

Phra Dhammajayo is now wanted on an arrest warrant approved by the Criminal Court on charges of money-laundering and receiving stolen property worth 1.2 billion baht in connection with the 12-billion-baht Klongchan Credit Union Cooperative embezzlement case.

Gen Paiboon said he told the DSI investigators to wrap the case up quickly and forward it to the prosecution within two to three weeks.

The minister ruled out the possibility of asking Prime Minister Prayut Chan-o-cha to invoke sweeping powers under Section 44 of the interim charter to arrest the abbot.

The prime minister stressed the need for investigators to handle the case according to normal legal procedures and to ensure there are no serious repercussions from their actions, Gen Paiboon said.

Gen Paiboon said DSI investigators have strictly followed legal steps in their handling of the case and there is no "double standard" that would benefit any particular group.

However, Deputy Prime Minister Wissanu Krea-ngam yesterday said there was no need for the SSC to step in. It is the DSI's responsibility to handle the case and the SSC has nothing to do with it, Mr Wissanu said.

Mr Mano, a former National Reform Council member, yesterday met DSI investigators to give suggestions on how to deal with the abbot of Wat Dhammakaya.

Mr Mano said Somdet Chuang who mentored the abbot when he entered the monkhood in 1969, should do his bit to help DSI investigators.

Somdet Chuang can help by telling monks and followers at the temple to go home in order to allow authorities to do their job more easily, Mr Mano said.

He added that he has received information that at least 5,000 followers, together with more than 500 monks have camped out in the temple. But if Somdet Chuang, as a senior monk of the SSC, failed to cooperate, he could face a charge of dereliction of duty, Mr Mano said.

Heavy vehicles were parked across the entrance to Wat Phra Dhammakaya yesterday, blocking access by DSI officers should they try to arrest Phra Dhammajayo.

The temple closed its main entrance on the Bang Khan-Nong Sua road on Thursday night. 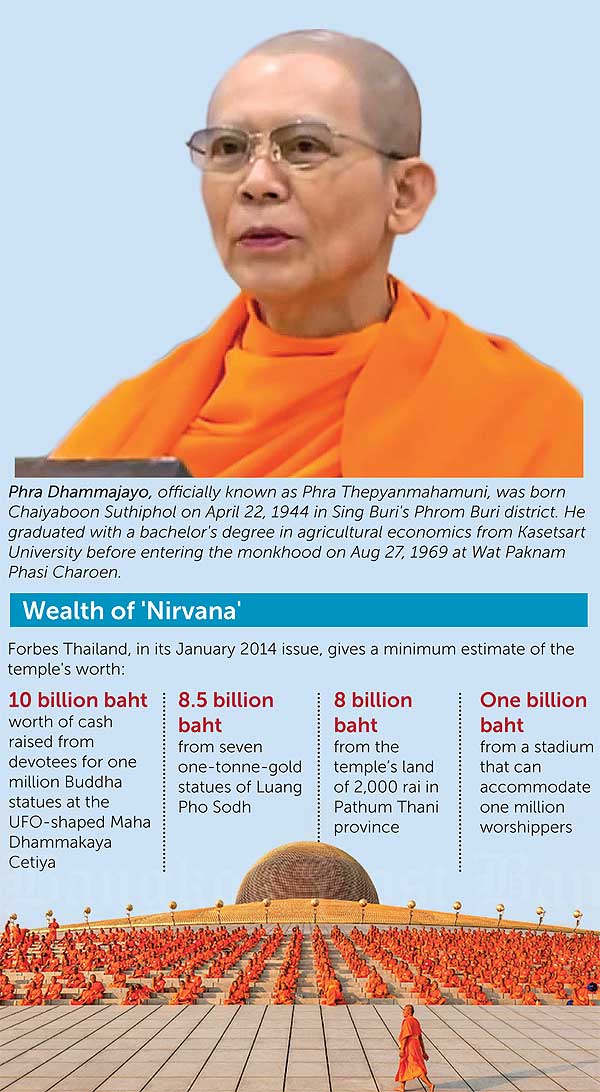