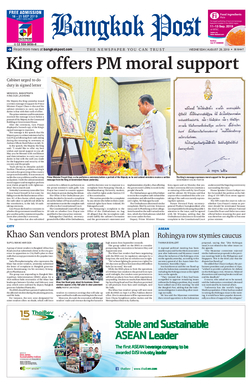 Navy not out of its depths in joint drill with US

An anti-submarine drill between the Thai and US navies was held in the Andaman Sea last week. (Photo by Pattanapong Hirunard)

The Royal Thai Navy may have failed to find submarines to add to its own fleet last year, but it has proved adept at hunting down an enemy's underwater arsenal.

The navy drew praise from top commanders for its performance in the Guardian Sea naval exercises, held opposite United States forces from Monday to Friday last week, which focused on anti-submarine warfare and maritime domain awareness.

HTMS Chakri Naruebet, HTMS Taksin and HTMS Naresuan of the Thai navy were all dispatched to join the exercise, along with anti-submarine S-70B Seahawk helicopters.

"The exercise was beneficial to the navy on multiple issues, from reviewing our work and testing newly installed systems, particularly submarine detection, as well as learning about an ally with new technology," said RAdm Vasinsan Chantavarin, commander of the Royal Thai Fleet's helicopter carrier squadron.

He said lessons learned from the combat drills would be used to improve the navy's personnel and tactical capabilities, allowing it to better deal with enemy threats involving underwater crafts. 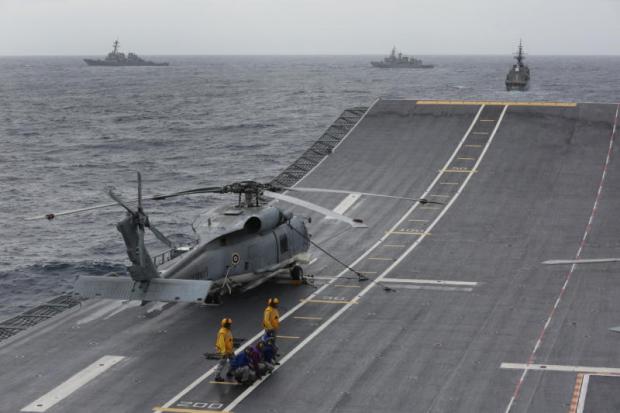 Ready for action: A helicopter sits on the deck of HTMS Chakri Naruebet, which took part in an anti-submarine drill between the Thai and US navies in the Andaman Sea last week. (Photo by Pattanapong Hirunard)

Capt HB Le, commodore of the US navy's Destroyer Squadron Seven, praised the Thai navy's operation as being professional and better executed than previous years' exercises, according to RAdm Vasinsan.

He said the navy was recognised for its good management of data transmission systems, noting that newly installed sonar systems on HTMS Taksin and HTMS Naresuan were chosen for their potential to detect submarines and order attacks on par with US warships.

The exercise, he said, also allowed navy personnel to train, use equipment, practise submarine tactics and boost ties between Thailand and the US.

He believed the drills gave the public an opportunity to learn that the navy has the capability to suppress submarines and protect the country's maritime territory. RAdm Vasinsan said naval personnel had learned valuable skills in identifying a nearby submarine from the different sounds the engines make at various depths.

They were also trained to track down submarines through sonar systems equipped on warships and from helicopters.

The exercise also allowed them to learn about submarine tactics and how best to counter them, he said. RAdm Vasinsan said the deployment of a US submarine in the exercise helped the Thai practise full maritime defence.

The drills also allowed three of the Thai navy's largest warships to practise data sharing with aircraft and among the fleet, which will boost the navy's capability in monitoring and suppressing enemy submarines, he said.

"When we detected a submarine's location, we sent vessels to protect the key warships, which were commonly targeted by submarine attacks," said RAdm Vasinsan.

The torpedo-equipped vessels and anti-submarine helicopters could be deployed to attack underwater crafts if major warships are unable to navigate out of an enemy submarines' way, he added. Naval crew also succeeded in installing torpedoes on the deck of a ship in 14:28 minutes, less than the 15 minutes it took when they practised on land, while helicopters attained a 70 to 80% success rate in detecting submarines, he said.

RAdm Vasinsan said the navy has called for more modern equipment to be deployed in future joint naval drills.

He added that the navy was interested in joining larger-scale exercises with multiple countries.

Capt HB Le said he expects next year's exercise to be more complex, since relations between the two countries have deepened.

Guardian Sea is only one part of the navy's annual exercises, which began on May 17 and run through to June 3.

The first five days involved naval surface warfare exercises in the upper Gulf of Thailand. It was followed by Guardian Sea drill.

The fleet will later return to the Gulf, where they will join exercises with the air force. RAdm Vasinsan said the exercises will test the navy's ability to remain operational at sea for more than three weeks.