Beijing moves to head off US on seas row

China has problems with some Asean countries over its claim of sovereignty of everything within the red-dotted line in the South China Sea. (Illustration courtesy Radio Free Asia/RFA.org)

China is stepping up its efforts in resolving the disputes in the South China Sea by calling for a joint military exercise with all Southeast Asian nations.

The call, made last year, was repeated in the Lao capital of Vientiane last week when Chinese Minister of National Defence Chang Wanquan met his counterparts from the 10-member Association of Southeast Asian Nations (Asean), Defence Minister Prawit Wongsuwon said.

The move came as US President Barack Obama last Monday visited Vietnam -- one of the disputing parties in the maritime conflict -- to normalise bilateral ties between the two former enemies, including lifting Washington's arms embargo on Hanoi.

As Vietnam and the Philippines are building up their sea power amid growing maritime tensions with China, Gen Prawit said, after returning from the 10th Asean Defence Ministers' Meeting (ADMM) in Vientiane that China was interested in conducting a joint war game with the 10 Asean members.

At the last informal Chinese-Asean defence meeting in October, Gen Chang expressed a willingness to hold a joint drill with Asean countries "to better fulfill the Code of Unplanned Encounters at Sea (Cues) to avoid potential miscalculations on the disputed area", according to the state-owned China Daily.

The non-legal-binding Cues is an agreement upon which most Asia-Pacific nations, including the US and China, have a standardised protocol of safety procedures, basic communications and basic manoeuvring instructions to follow for naval ships and aircraft during unplanned encounters at sea.

Gen Prawit said all sides at the Vientiane meeting were interested, though a Thai military source said there was no agreement on the Chinese proposal yet.

"Vietnam and the Philippines simply acknowledged it. Thailand will certainly go ahead if all sides agree to it. But the disputed nations should talk to China and minimise mistrust," the source told the Bangkok Post.

Beijing claims four-fifths of the South China Sea as its territory, but Brunei, Malaysia, the Philippines, Taiwan and Vietnam also have overlapping claims across one of the world's busiest shipping lanes.

Without mentioning the Chinese proposal, the 10th ADMM Joint Declaration said the ADMM resolved to cooperate to combat the transnational threat of terrorism, as well as observe international protocols such as the Cues.

The ADMM meeting also emphasised the importance of fast-tracking the conclusion of the Code of Conduct in the South China Sea -- a thorny issue they had with China in pushing for the "defence diplomacy" tool.

Thailand is the only Asean member that has extensive military relations with China on all fronts. 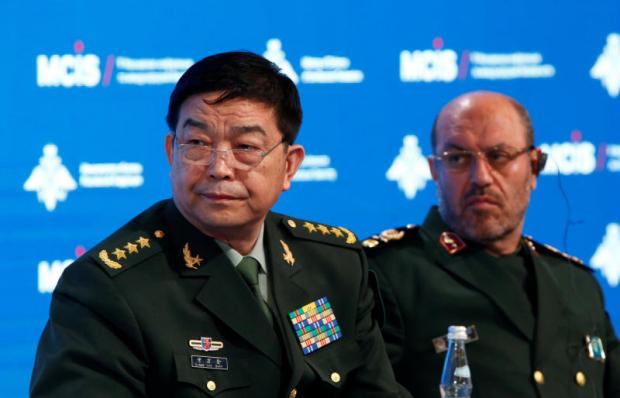 Bangkok's welcoming gesture to Beijing's joint exercise call has drawn a mixed response from analysts interviewed by the Bangkok Post.

"The PLA's interest to broaden defence cooperation into a joint China-Asean war games under the ADMM Plus bodes well for Southeast Asia, as tensions in the region have mounted in recent months. If the PLA follows through, Asean's armed forces likely would be receptive," he said.

"It would be a sign that Asean has gained some leverage vis-a-vis Beijing by leaning on Washington in the maritime domain. It would also be a step forward in enticing China to accept a rules-based regional order and move forward with the code of conduct."

Yun Sun, of the Washington-based Henry L Stimson Centre, said China wanted to rally regional support and put Asean in closer alignment with China in lieu of the Shangri-La dialogue -- to be held in Singapore later this week -- and the international tribunal's ruling on the South China Sea next month.

"The Chinese defence minister's gesture is to demonstrate that China is in a good relationship with Southeast Asia and the crisis is not as dire as perceived," Ms Sun said.

A former Bangkok-based Asian diplomat said the Thai leadership was leaning towards the Chinese even long before the coup "as the US is unsympathetic to them. Playing the China card would make the US get off the generals' back".

A Bangkok-based Asian ambassador said it is natural that China wants to push for closer cooperation with Asean, but "I can only guess how each Asean defence colleague would react to such a proposal".

A retired Thai ambassador doubted if the proposal would materialise as Asean couldn't act without consensus on such a move and several members would oppose it. "Gen Prawit's remarks might be a tactic to please China."