Justice Minister Paiboon Koomchaya asked followers of embattled abbot Phra Dhammajayo to sympathise with victims of the Klongchan Credit Union Cooperative embezzlement case, in which the senior monk is involved.

The minister on Tuesday responded to a spokesman of Phra Dhammajayo's followers, who on Monday announced that supporters inside and outside Thailand were becoming frustrated with the supposed "unfair treatment" of the abbot of Wat Phra Dhammakaya and that management of Pathum Thani province might be unable to control them.

"They must look into the Klongchan Credit Union Cooperative case, in which tens of thousands of people were victims of embezzlement and went broke. We must retrieve those assets... They have been patient for a decade. Unless we find the culprits, how can we retrieve the assets?" Gen Paiboon said.

Followers of Phra Dhammajayo could send their representatives to meet him and he would explain the case, the minister said.

Phra Maha Nopporn Boonyachayo, a spokesman for the temple, on Tuesday released a letter from president of the World Theravada Buddhist Sangha Council in Sri Lanka complaining about the prosecution of Phra Dhammajayo.

Ven Mugunuwela Anurudhha Thero wrote on Monday to Prime Minister Prayut Chan-o-cha that the abbot was unjustly persecuted and defamed by the Department of Special Investigation (DSI) and media.

Phra Dhammajayo was charged with laundering money and receiving stolen property as he received 1.2 billion baht from Supachai Srisuppa-aksorn, former chairman of the cooperative and treasurer of his temple. Authorities recently said that the two had an extremely close relationship.

Supachai already has been sentenced to 16 years in jail for 12-billion-baht embezzlement of the cooperative that once was the richest in the country.

The justice minister also said that authorities were treating Phra Dhammajayo specially compared with other suspects. Wanted on an arrest warrant, the abbot failed to turn himself in to acknowledge charges on Thursday as demanded by the DSI and public prosecutors.

Wat Phra Dhammakaya was closed to outsiders with large vehicles and barbed wire enclosing its vast compound. Posters saying followers were ready to sacrifice their lives for the abbot were hung.

Phra Maha Nopporn said the barbed wire was erected along the fence of Wat Phra Dhammakaya to prevent a third party from creating disorder in the temple.

Adherents should refrain from breaking the law or obstructing authorities, the justice minister said.

If Phra Dhammajayo was innocent, a court would clear him, the general added.

In March last year, the cooperative filed a civil case against the abbot and the temple for a return of the 684.8 million baht the co-op's former chairman had paid the temple and the abbot.

The temple set up a fund to "help" the cooperative's victims. Supporters of raised money to reimburse Klongchan through the fund. The amount was fully repaid in August.

Later, the cooperative found Supachai had paid another 370.8 million to the abbot and his supporters again reached a deal to repay it through the fund.

All in all, the temple's fund raised 1.05 billion baht to repay the cooperative. The co-op then dropped the civil lawsuit against the temple and the abbot. 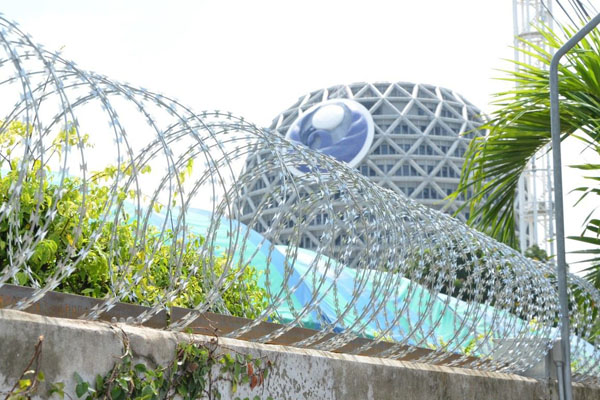