The Department of Special Investigation is closely examining the legality of the public plea by DTAC board chairman Boonchai Bencharongkul for disciples of Phra Dhammajayo nationwide to gather at Wat Phra Dhammakaya in support of the sect's embattled abbot.

DSI chief Pol Col Paisit Wongmuang said investigators would view Mr Boonchai's  interview broadcast by the temple's satellite TV station, DMC, on Friday, in which he called on disciples of Phra Dhammajayo to travel to Wat Phra Dhammakaya for a “major practice of Dhamma”, ensure justice for the abbot and clear him of a calumny. 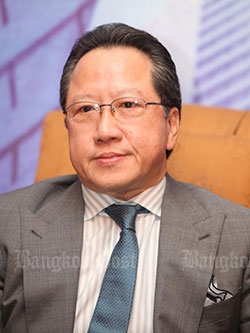 Officials would check whether the billionaire’s persuasive remarks were intended to impede police in arresting the 72-year-old abbot, and if they were construed as inciting people to attend an illegal public assembly.

Pol Col Paisit also wanted the National Office of Buddhism to investigate whether Wat Phra Dhammakaya had violated the 1941 Sangha Act when DSI officers attempted to serve a warrant to search the temple and arrest the abbot on Friday.

The DSI chief was referring to the temple’s use of a large mass gathering of white-clad devotees as a human shield for Phra Dhammajayo, which led to the DSI eventually calling off the foiled search.

“The DSI has enforced the law thoroughly. We ask related agencies to perform their duty too,” Pol Col Paisit said.

A source at the DSI said officials were assessing the situation and planning their next operation to search the temple and arrest the controversial abbot, but had yet to decide when it would happen.

Phra Dhammajayo is facing an arrest warrant on charges of money laundering and receiving stolen property in a criminal investigation associated with the multi-billion-baht Klongchan Credit Union Cooperative embezzlement.

Mr Boonchai is a devotee of the rich Buddhist sect led by Phra Dhammajayo.