Sirawith "Ja New" Seritiwat, a key student activist, is detained by police at Royal Plaza on Friday while taking part in an activity to mark the 84th anniversary of the "Siam Revolution" on June 24, 1932. (Photo by Apichart Jinakul)"

Thailand marks the birth of democracy on Friday with arrests of student activists and a campaign to name it "National Trash Day".

Seven student activists were arrested while holding an activity to mark the June 24 revolution in 1932 at Laksi intersection in Bangkok on Friday.

Members of the self-styled Seri Kasetsart Group, based at Kasetsart University, gathered at Wat Phra Si Maha That before marching to nearby Laksi monument on Friday morning.

They were joined by Chanoknan Ruamsap, a leading student activist of the New Democracy Movement (NDM).

About 100 uniformed and plainclothes police from Bang Khen police station and the Metropolitan Police Bureau were deployed at the monument. Some officers were sent to Wat Phra Si Maha That.

When the students and Ms Chanoknan arrived at the temple and distributed copies of the NDM’s Kao Kham newspaper police asked them stop their activity. The activists refused and marched to the monument.

When the group arrived at a pond inside Phranakhon Rajabhat University, police seized the group’s  pamphlets, according to Thai media reports.

Ms Chanoknan argued that the paper being distributed had nothing to do with the campaign against the draft constitution. The activity was held to mark the June 24 revolution at this monument, she said.

Police arrested Ms Chanoknan and six other activists on charges of illegal assembly in forming a public gathering of more than five people in defiance of an order of the National Council for Peace and Order (NCPO). They were later taken to Bang Khen police station.

On Facebook, Maj Gen Rianthong Nanna, director of Mongkutwattana Hospital in Bangkok, issued a statement on Friday on behalf of his National Trash Collection Organisation that he would rather mark the day “National Trash Day”.

“On June 24, 1932, Col Phraya Phahol Pholpayuhasena, together with some soldiers and people, deceived the armed forces into moving armed troops to detain royal officials and issued a statement deemed deeply insulting and slandering to King Prajadhipok.

“Their goal was to seize the ruling power and change the rule of the country. All of these people received royal grants and permission to study abroad so they could bring back knowledge for country development. Instead, they betrayed His Majesty,” he wrote.

No one could change the repercussions of that transformation and all Thais were forced to accept them, he continued.

“But if there’s a revolution in the future to change the rule of the country again to a democracy without the monarch as head of state, loyal citizens must stage an uprising and turn themselves into the 'citizen royal guard' without delay.

“We’ll then write history together so posterity is aware of the ‘National Trash Day’," he wrote.

Maj Gen Dr Rianthong urged his friends and followers to share the post. His Facebook was Liked by some 37,000 people as of noon on Friday. The post was also shared the Facebook of the National Trash Collection Organisation, which got 240,000 Likes overall.

Maj Gen Dr Rianthong, a member of the People's Democratic Reform Committee made headlines in 2014, when he set up the strangely named organisation.

The body’s stated its objectives was to take action to “increase the efficiency of law enforcement against people insulting the monarchy”.

It has since hunted down and identified people whom they deem expressing views or acting in an insulting manner to the monarchy, and reported them to police so lese majeste charges could be brought against them.

The June 24 revolution was a bloodless coup led by a small group of Bangkok intellectuals in 1932  that put an end to 700 years of absolute monarchy in Thailand and replaced it with the current system of a constitutional monarchy. 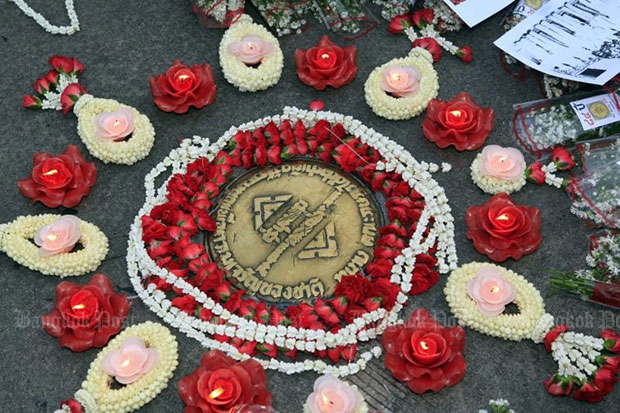 A brass plaque marks the spot where the revolution's leader read the first announcement. (Photo by Apichart Jinakul) 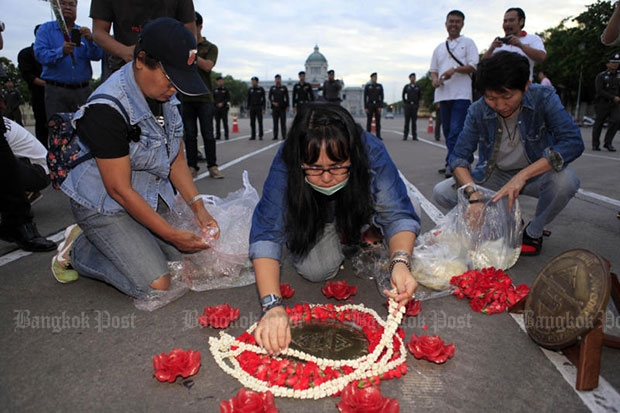 Activists place a flower garland at Royal Plaza in front of the Ananta Samakhom Throne Hall on Friday as part of an activity to mark the 84th anniversary of the "Siam Revolution'' on June 24, 1932. (Photo by Apichart Jinakul)