Prayut says he won't resign if charter is rejected

Prime Minister Prayut Chan-o-cha insists he will not follow UK Prime Minister David Cameron's example and resign if the draft charter is voted down in the Aug 7 referendum.

The two issues could not be compared, Gen Prayut said on Monday, after being asked about Mr Cameron's resignation in the wake of last week's referendum vote to take Britain out of the European Union, a move he opposed.

"The two cases are different. Do you want me to resign? I won't. I set the rules. He did not come up like I did. His country does not have the same problems ours does," coup-leader Gen Prayut said. 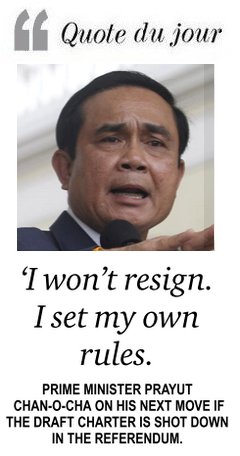 The draft charter that goes to a public referendum on Aug 7 is the second drawn up during the prime minister's tenure. The first one was voted down by the National Legislative Assembly in September last year.

According to the charter writers, it is aimed at keeping corrupt politicians out of the parliament.

Political activists and politicians who support former prime minister Yingluck Shinawatra, whose Pheu Thai party government was overthrown by the May 22, 2014 coup, are opposed to the draft constitution, while supporters and members of the rival Democrat Party largely support it.

Gen Prayut warned campaigners on both sides not to violate the referendum law, which prohibits any party from trying to influence people to vote for or against the draft charter.

The prime minister also complained that a former northern MP had lied to people in his former constituency, telling them they would lose access to cheap medical treatment if they cooperated with the current government.

IEAT is planning to develop a dry port in Udon Thani, with the aim of making the province a centre for regional land transport, linked with the Chinese-Lao high-speed train system.