Analysis: Subdued tone in lead-up to poll unlike the vote in 2007

The Aug 7 referendum on the draft constitution will take place as planned despite the political atmosphere being subdued by legal restrictions on political activities and expression of opinions.

Political observers note the atmosphere building up to the Aug 7 referendum is muted compared to the 2007 referendum.

Open debates between supporters and opponents of the 2016 draft charter have been restricted by the regime's ban on political activity as well as the harsh penalties under the Referendum Act and the Election Commission's referendum rules. 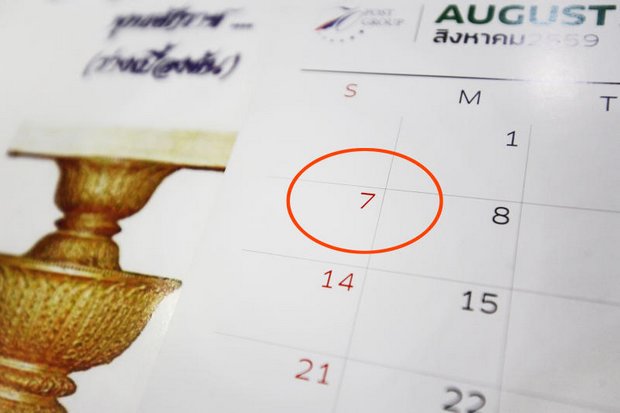 This has imposed a straitjacket on political stakeholders, crippling their ability to freely discuss its pros and cons.

However, most believe the Aug 7 referendum will go ahead as planned given the international community has been pressuring the military government to stick to its roadmap for elections next year to restore democracy to the country.

Moreover, if the draft charter passes, it will still favour the regime, with provisional clauses giving the leader of the National Council for Peace and Order the power to choose 250 senators who will serve a five-year term during the transition period to full democracy.

The regime will also benefit from the extra question relating to an appointed Senate being added to the referendum if the question also passes.

Voters will be asked whether the 250 appointed senators should be allowed to join the House of Representatives in the voting process to select a prime minister for a five-year period.

Election Commission member Somchai Srisutthiyakorn said there has been no sign the referendum will not take place and the EC's preparations are still under way.

"The military has not sent any signals to the contrary so everything is going ahead as planned," Mr Somchai said.

However, Mr Somchai admitted the build-up to the referendum is low-key compared to the 2007 referendum which had a more vigorous publicity campaign to encourage the public to vote.

Mr Somchai, a former secretary-general of the People's Network for Elections in Thailand (P-Net), an independent election watchdog, said public interest in politics, or the lack of it, is one factor contributing to the quiet atmosphere ahead of the referendum.

He noted voters tend to be less interested when referendums or elections remain distant, but they become more enthusiastic when those events are approaching. An increase in enthusiasm is likely as the poll draws near.

He also said the number of people registering to vote outside their home provinces for the charter referendum is more than 325,000, or 34% higher than the 2007 referendum which had about 242,000. 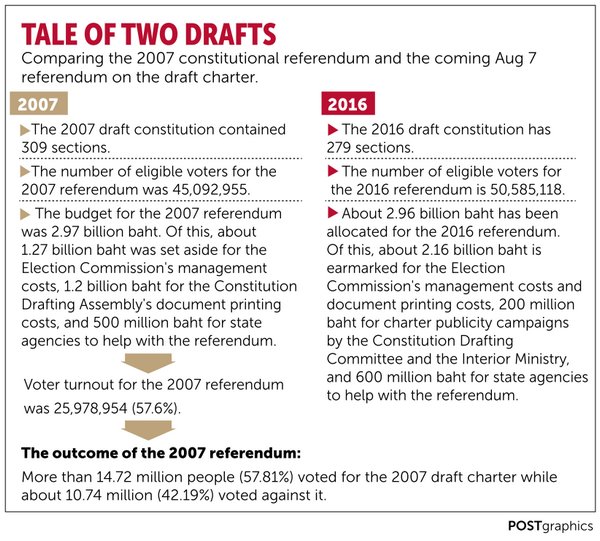 Mr Somchai disagreed with those who argue the public should not accept the draft charter because it was sponsored by the coup-makers.

"It is wrong to dismiss the draft charter only because it was born out of the coup. Many reject it without studying it first. What matters most is whether it will benefit the public," Mr Somchai said, adding that several past constitutions, including the 2007 charter, were also born out of military coups.

Wanwichit Boonprong, a political science lecturer at Rangsit University, echoed the view the atmosphere ahead of the referendum is subdued despite vigorous efforts to encourage voters to vote in the referendum.

Several polls showed many people did not know about the referendum, the content of the draft charter and the extra question, which indicated a lack of public interest, he said.

Mr Wanwichit said the government and the NCPO's restrictions on people expressing their opinions is having a major impact on the atmosphere ahead of the referendum.

Mr Wanwichit said that during the 2007 referendum, both opponents and supporters of the 2007 draft charter were allowed to express their views and launched their campaigns to educate the people.

But for the 2016 referendum, the writers and supporters of the 2016 draft charter are able to promote the merits of the document, while opponents are not given a chance to discuss its weaknesses, Mr Wanwichit said.

"People will feel bored, and this will only discourage people from going to vote," he said.

Foreign Minister Don Pramudwinai said Sunday that foreign countries and the United Nations are not worried about the Aug 7 referendum as they realise the referendum is a domestic affair.

Sitthipong Thanomjit, 29, a water delivery worker, said he knows about the referendum from radio and social media, though he still has no details of the draft charter.

But he said he disagreed with the draft charter because the draft does not come from an elected government.

Sirirak Sae Ung, 51, an event organiser, said she learned about the referendum on Facebook and radio shows and she expects to vote for the draft in the referendum.