Key figures from the Democrat and Pheu Thai parties have lashed out at the draft constitution, zeroing in on a clause relating to a non-elected outsider prime minister, and the extra question on an appointed Senate with the power to help select a prime minister.

During a ThaiPBS television programme yesterday, Democrat leader Abhisit Vejjajiva and Pheu Thai deputy leader Pokin Polakul criticised a draft charter provision that does not require a prime minister to be an MP, and makes it compulsory for parties to unveil up to three prime ministerial candidates each before the election.

The House of Representatives, and the Senate will jointly choose the prime minister from the lists after the poll if the extra question in the ballot passes the referendum on Sunday.

Mr Pokin said that choosing a prime minister from only the lists submitted is too risky. 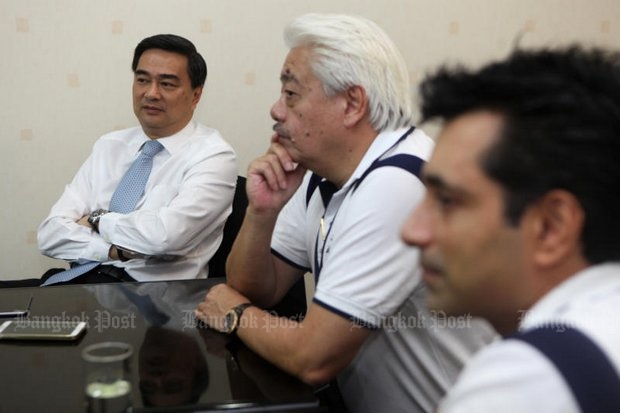 Mr Abhisit disagreed with the extra question that has been added to the Aug 7 referendum.

For example, if a party wins a slight majority in the 500-seat House, but its prime ministerial candidate is not chosen for the top post because the 250 senators support a candidate from another party to become a prime minister, this would anger the people who voted in support of the winning party.

"If we want to reduce conflict, we have to avoid creating new ones. It is necessary to empower the people and prevent bargaining between MPs and senators," Mr Abhisit said.

Mr Abhisit also said he did not oppose an outsider becoming prime minister, but there should be "special preconditions" for an outsider to take the post.

He pointed out the three-candidate list system would restrict the choice of prime ministerial candidates who might not be politically impartial.

Mr Pokin said the appointed Senate does not represent the public, and questioned what would happen if the national reform strategies devised by the Senate as one of its key tasks do not respond to the needs of the public.

In the event the draft charter passes the referendum, Mr Pokin said conflict will continue because opponents of the draft could not express their opinions or debate the draft freely from the beginning.

Mr Pokin said those in power have used scaremongering to prevent the draft being voted down.

Constitution Drafting Committee chairman Meechai Ruchupan yesterday warned that political parties must be held responsible if the draft charter fails at the referendum. An Election Commission employee holds up a plastic box which broke after being dropped three times at the Government Complex on Chaeng Watthana Road. The demonstration was meant to show how tough and secure the ballot boxes are. The boxes are to be used as ballot boxes in Sunday's referendum. (Photo by Pornprom Satrabhaya)