Government goes all out for 'Yes'
Thailand
Politics

Government goes all out for 'Yes'

A mahout and the Election Commission's Hanuman mascot escort a small elephant parade through Ayutthaya town to urge turnout and a 'Yes' vote for the draft charter on Sunday. (EPA photo)

The regime has pulled in all its resources, including provincial governors and military officers, to ensure it meets its ambitious target of a 70% "yes" vote in Sunday's referendum, according to government sources.

Interior Minister Anupong Paojinda and Defence Minister Prawit Wongsuwon are known to be the two key figures overseeing the referendum campaign through administrative officers and armed forces, which are the key machines to canvass for votes.

In May, permanent interior secretary Grisada Boonrach signed an urgent order to form a special panel to mobilise public relations campaigns for the referendum.

The panel's tasks include setting up provincial and district sub-panels handling the referendum campaign, organising the training of people assigned to teach locals about the draft charter's contents, as well as launching public relations campaigns on the draft.

Although the campaign is not directly convincing people to vote "yes", it is focusing on explaining the benefits, said the sources. 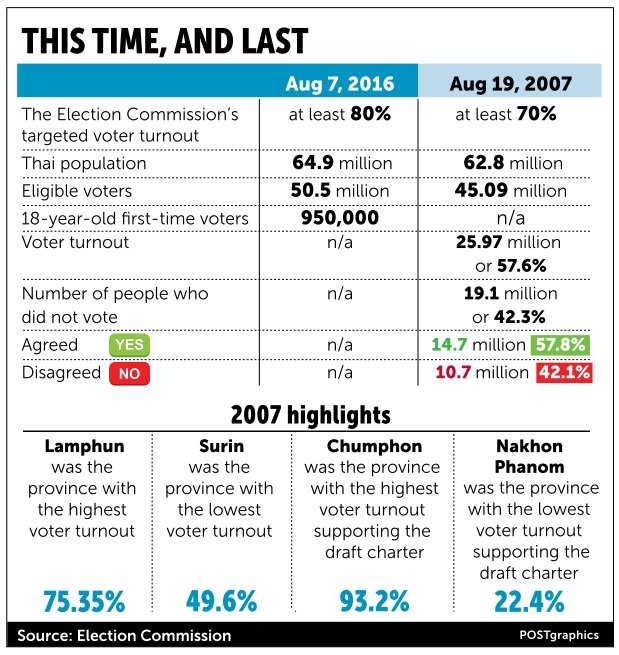 More than 700,000 people have been deployed to explain the draft charter to locals in 5,903 communities and 74,588 villages across the country.

They were selected from among village panelists, kamnan, village headmen, public health volunteers and teachers. They have been working closely with army officers over the past two months.

The source said multiple working panels have been sent to villagers to survey the possible number of people who would come out to vote and educate them about the draft's advantages.

People are also being informed that if the draft sails through, the country would move forward with an election and the subsequent formation of a government, the source noted.

"Many kamnan and village headmen said the public relations panel formed under the order is actually aimed at making sure people come out to vote," said the source.

"Verbal warnings have been issued that in any areas found to have low voter turnouts, local villagers, kamnan and village headmen risk being removed or changed."

Provincial governors are assigned to make sure public relations campaigns are proceeding as planned, while police have been instructed to ensure there will be no activities against the referendum, according to the sources.

Several reshuffles of provincial governors and police station superintendents were carried out over the past year across the country to make sure those in charge are supportive of the government, the source said.

The sources said teachers are also known as an important tool to influence voters.

Many of them underwent training on the draft charter and were urged to pass the word on to parents through their students about the need to get out and vote.

Groups of working panels involving canvassers are actively persuading people to come out and vote.

"Politicians in each area have been obstructed from playing any roles on issues related to the draft charter," the sources said.

Based on an internal evaluation, after two months of public relations campaigns, authorities are confident they will achieve their target of at least a 70% "yes" vote.

Meanwhile, Songkhla governor Songpol Sawasdham has asked all officials and employees of state agencies in the provinces to vote in the referendum, according to a leaked document, dated July 29.

Agencies must report their personnel who fail to cast a vote to provincial authorities on Monday.

The governor, according to the document, also asked that public sector and local leaders tell their people to cast their ballots.

Justice Minister Paiboon Koomchaya said that if the draft charter is voted down, the premier will try to amend it to make sure people are satisfied with a new charter as much as possible.