Foreign embassy warnings to their citizens about possible unrest during the referendum on Sunday are unwarranted and misinformed, National Council for Peace and Order (NCPO) spokesman Piyapong Klinphan said yesterday.

Information which countries say formed the basis of the warnings may not be correct as some parties might have distorted it, Col Piyapong said.

"If the situation turns out differently, the embassies that issued these warnings may appear less credible," he said.

The NCPO spokesman's comments came after the embassies of the United States, the United Kingdom, Canada, Finland, Denmark, Japan and Myanmar issued warnings to their citizens to stay away from polling stations during the referendum due to possible unrest.

They also urged their citizens to be vigilant and strictly follow Thai laws during the referendum.

Col Piyapong insisted the NCPO and the government are firmly in control of the security situation despite lobbying by proponents and opponents of the draft charter.

"Thais can handle internal issues themselves; we do not want to bother friendly nations," he added.

However, Deputy Prime Minister and Defence Minister Prawit Wongsuwon said Thursday it would be best if foreigners stayed away from polling stations during voting on Sunday since they would be denied access anyway.

Election Commission (EC) chairman Supachai Somcharoen said there were no reports of political unrest and Thais should not be unsettled by the embassy warnings.

"Police will work closely with the EC to ensure security measures are in place on Sunday. I believe the referendum will go smoothly because there are no signs of any political disorder," Mr Supachai said.

Deputy Prime Minister Wissanu Krea-ngam said it was normal for other countries to warn their citizens to avoid polling stations on voting day as a safety measure.

"We would do the same thing for our citizens to ensure their safety in a similar situation abroad," he said. 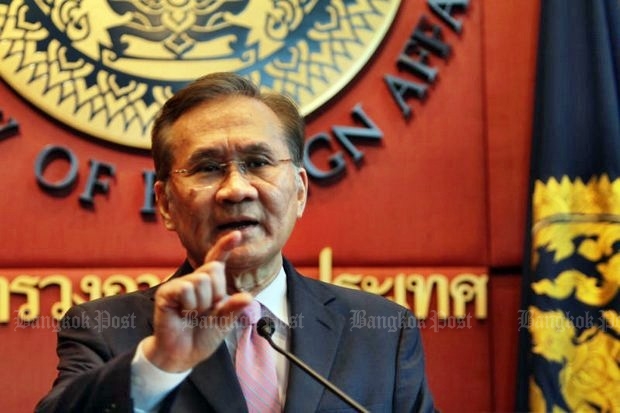 Irrespective of the result, the NCPO and the government will meet after the referendum to discuss what to do next as the government plans a path back to democracy, Mr Wissanu said.

He said he had not received any intelligence indicating any planned political demonstrations or unrest on polling day.

"There is no information indicating any public disorder will take place this Sunday. Thailand is a peaceful country. People live here with peace of mind, but some countries may not realise this fact," Mr Don said.

"Thailand is actually much safer than many Western countries,'' he said referring to a knife attack in London's Russell Square on Wednesday in which a woman was killed and five other people injured.

"I believe we [Thais] want to see this country move forward peacefully so, I do not think Thai citizens will stir up conflict on that day, except some political groups who have ill intentions," he said.

Mr Don urged people to turn out to vote in the charter referendum as the government wanted a big turnout.

"The referendum on the draft charter this Sunday is being held for the benefit of the Thai people," he said.

Meanwhile, Foreign Ministry spokesman Sek Wannamethee said the government has ordered that security measures be beefed up at embassies and for foreigners in the country on Sunday.

The embassies who issued the election warning did not raise their warning levels for Thailand.

They only urged their citizens to avoid areas where political gatherings will take place, Mr Sek said.

He also insisted the NCPO is strictly adhering to the road map so that a general election can take place as soon as the time frame will allow.